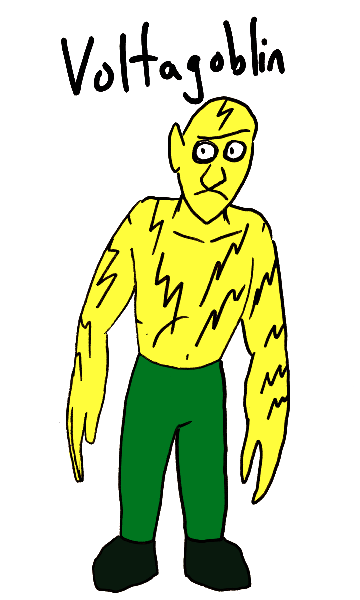 The Voltagoblin is the last of his kind. For most of his existence, the Voltagoblin lived in a pocket dimension contained in a candle. The candle was owned by a mystic, who would enter the dimension and live like a king. That was not enough for the mystic, though, so outside of the pocket dimension, he was a magic-using criminal. That attracted the attention of superheroes like the Beam, who shut down the mystic’s operation.

The denizens of the pocket dimension, without their ruler, tasted freedom, but the mystical maintenance of their realm suffered. Faced with the apocalypse of their fantasy world, Voltagoblin and several of this fellows formed a sort of roving band of warriors and ruled over the ruins. There were other bands, of course, and fighting followed. Ultimately, the electric-powered Voltagoblin discovered the portal the lost mystic used to get to Earth. “Screw everybody else” was his line of thought as he passed through the portal and closed it behind him. Once he realized what was the deal was, he snuffed out the candle’s flame. 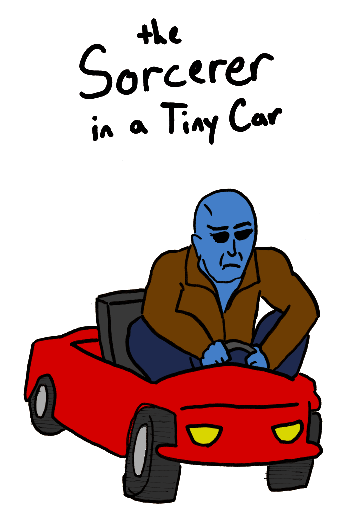 Sorcerer In A Tiny Car

With mystical control of the four elements and of his four wheels, this mysterious driver races into towns and attacks armored vehicles, stealing what he can, then races out of towns, never stopping for a second. Even when opposed by the police, or the Guild of Crime Fighters, the Sorcerer in a Tiny Car never slows down. He’s never even stopped long enough for anyone to learn his name. So far, though the good guys have sometimes prevented his thefts, none have ever managed to catch him.

If I’m using this year to create the kind of villains I want to see in superhero comics, this guy is one. Supeheroes and Tiny Cars need to be united, dammit.