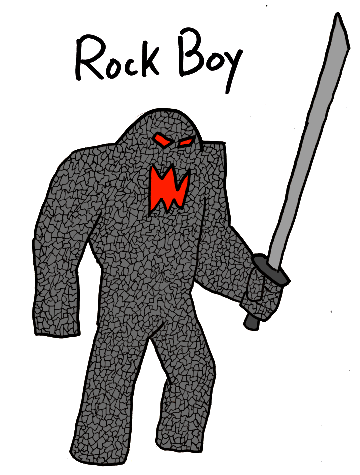 The mysterious Rock Boy, it seems, was animated by a cosmic-powered being to protect a doomsday weapon on the strange island of Pitchachua. Rock Boy stood guard in an underground temple awaiting the return of the Cosmic King. But then Karl Franklin came along and ruined everything. Franklin defeated Rock Boy and destroyed the doomsday device and the temple. But Rock Boy was still alive and now had no purpose.

This powerful being with stone skin and a powerful sword has the intelligence level of a young child, so it should not be surprising that he tends to be an uncontrollable menace.

Pitchachua was an island, referred to as “The Pit”, that was the setting to some ideas I had in my junior high days. I don’t remember much beyond the name, unfortunately, but I thought this might be a good place to stick that name. 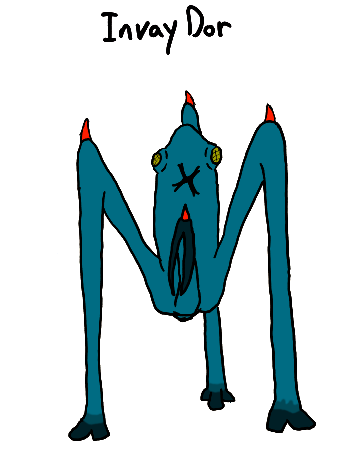 Crashing to Earth like a meteorite, the entity who calls itself Invay Dor (a corruption of the word “Invader”) seems intent on conquering the planet itself. With legs powerful enough to kick through steel and a claw that could cut through a human skull with ease, Invay Dor is capable of doing some serious damage and it was only the intervention of the Strange Squad that saved the small town where it tried to set up its base of operation.

This was just me making a conscious attempt to get an alien that looks inhumanoid. That is all I have to say.

Some lacklustre attempts at coloring this time, but I have downloaded a new program that shall hopefully make it possible for me to do good coloring jobs in the future. We’ll be seeing more color in the future.