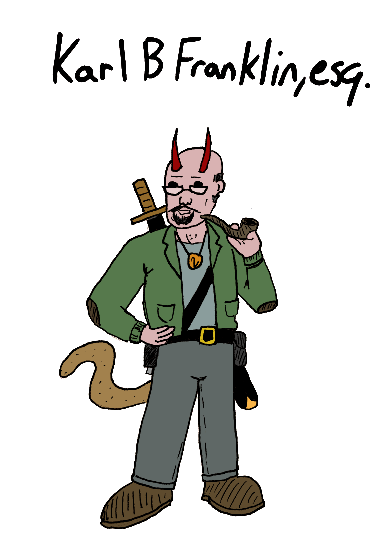 Born into a wealthy family, Karl Franklin had the opportunity to live his life any way he wanted. He wanted to see the world, so he has spent years travelling to exotic locations, studying at the best schools, and meeting interesting people. Naturally, this led to a life of adventuring. He has raided many a dungeon and fought smugglers in many an archaeological dig. To aid in his adventures Karl carries a sword, a gun, a magic amulet, a pipe, and a bag of tricks, but that is not all: over the years he has somehow acquired a pair of horns and a prehensile tail. Some might consider those to be deformations, but since they come in handy, he has no desire to get rid of them. Karl B. Franklin is an adventure-having expert and loves every second of it.

Karl Franklin is based off of an old sketch I had around, but I didn’t have a story for him until just now. I meant for the character to have a form of dwarfism, but I’ve never done the research to know which type (probably achondroplasia, I guess) because there’s not a lot of little person characters going on in comics. I mean, I can name about a dozen, but I’m crazy knowledgeable. I would figure that the most prominent example in comics would be Puck, of Alpha Flight, except from his backstory he is not a natural dwarf, but is the victim of a magic curse. That’s stupid, so Karl Franklin is my own diminutive guy hero who suffers from magic effects, but those two things are not related.

With the ability to burst into flame and fly, little Timmy McIsaac became Combustaboy, the Fiery Teen, to make enough money to pay his way through college. Superheroing is not what Timmy wants to do with his life. To him, this is just a job. His heart isn’t in it and he let’s it show. Still, if you can create fire at will, there’s always going to be someone who is willing to pay you for something, right?

The story I came up with for Combustaboy is just a young superhero, but since I’ve gotta talk about something down here, I’m going to go with teen-aged sidekicks. The concept of teenage heroes is ubiquitous in comics, but for some reason the concept of a kid sidekick has faded away since the olden times. With the exception of Batman and Robin, teen sidekicks are almost never treated seriously anymore. I guess that is because you’d have to be Bruce Wayne-style crazy to recruit children into a war on crime. But still, here’s a stray thought I had on the idea: in the 1940s, a sixteen-year-old was more of an adult than a sixteen-year-old is these days. It was much more common back then for teenagers to drop out of school and take jobs and help support their families. My argument is harmed by the fact that the teen sidekicks in the comics of those days were more likely to act like eleven-year-old than grizzled sixteenagers, but I do think that when you’re telling stories of olden times, it isn’t as absurd for a superhero to have a kid backing him up. I mean, teenagers are sent to fight in real wars and some even lied to get in before they were of age (heck, Calvin Graham was twelve in WWII), so a kid helping out a superhero is not one of the most absurd superhero tropes as far as I’m concerned.