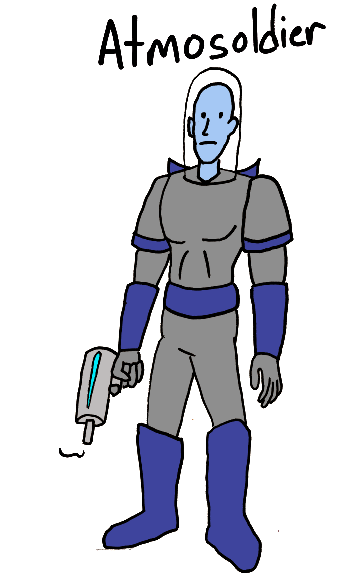 In preparation for a desired attack on an alien world, a pseudo-military force needed an ideal soldier for that invasion. Fortunately, with the proper resources, such a soldier can be built. Using cutting edge technology this group converted a unit of hired troops into a genetically modified fighting force suited to an alient atmosphere.

They still lost the invasion, though. The beings on the alien world were more advanced than expected and the modified troops were massacred. The aliens then sent a single representative to Earth and the entire pseudo-military complex was brought to its knees. In the end, through sheer dumb luck, only Wilma Clarke remained.

Left in the smoldering remains of her employer and now modified to exist in an environment other than that of her homeworld, the Atmosoldier had few options. Using what remained of her military resources, Wilma turned to crime to keep herself alive (and, in some way, to work through the trauma she had witnessed). Whether robbing a bank or working as a villain-for-hire, Atmosoldier puts her earnings to use getting access to the chemicals she needs just to breathe. 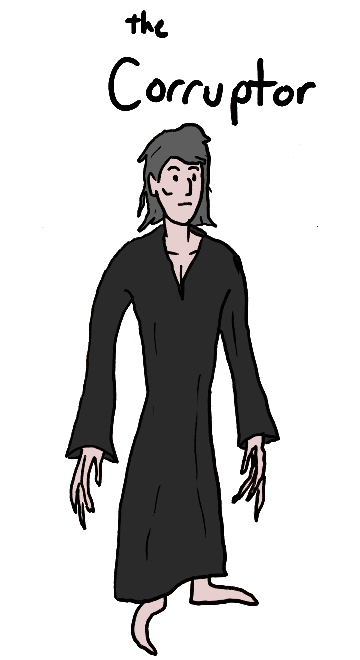 In the beginning there was nothing. Then things started to happen. This was a chaotic time, a frothing roil from which all manner of strange wild things came and went in unformed time that made them brief and eternal. But then solidity. Universes established laws of physics that held them together, preventing the chaotic things from maintaining a foothold. Some of the chaotic things liked it better the old way. One of the old dark things wants things to go back as they were. The only way to do that is break down the physics of the solid universes and return them to the fluidic chaos of old.

This evil intelligence from the void beyond time has reached into the universe and possessed a young human host. This host, in constant pain, can only find relief in furthering the plans of the intelligence. Almost apologetically the host enacts schemes, encouraging politicians or other people with power to cause suffering among the larger population. This suffering powers the strange mystic machinery which could destroy the universe. So far, the only thing preventing the Corruptor’s success is the tireless efforts of the Green Camera, whose camera can locate the Corruptor’s plots before it is too late..