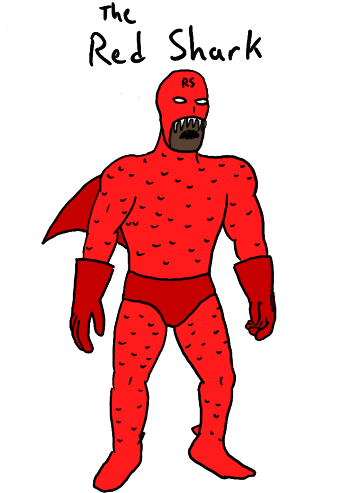 Murray Carter was an archaeologist studying a shipwreck when he was caught in a freak electrical storm. Struck by some sort of mystical red lightning bolt that caused his body to adapt to the undersea environment. Strong enough to withstand the pressures of the deep sea and able to swim faster than the quickest sea animals, Murray created the identity of “the Red Shark” to fight some pirates who tried to steal the archaeological findings. Since then the Red Shark has continued to fight crime on the high seas.

The aquatic superhero is a tradition almost as old as the superhero itself, with guys like Namor and Aquaman dating back to 1939 and 1941 respectively. While everybody loves to make jokes at Aquaman’s expense (because the Internet will always love an easy running gag), these guys are a tradition that I had to get in on, so the Red Shark is the result. It is, of course, worth noting that I probably hold the world record for writing the most Haikus about Namor. 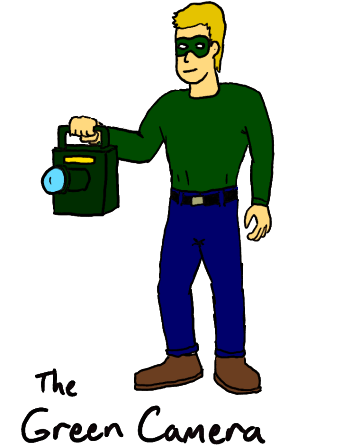 Matthew Callahan was an intrepid award-winning reporter known for putting himself at risk to get at the truth. On one case, however, Callahan was shot in the hip and left unable to walk. When appearing on a radio show to tell his story. The broadcast was picked up by aliens who, liking the cut of Callahan’s jib, came to him in the night and gave him a device they called the Green Camera.

When holding the alien Camera, Callahan can fly, but that is not its primary use. As you would expect, the Camera takes pictures. The Camera sees only the truth. In addition to being able to zoom in and all that sort of thing, its images can see through any sort of untruth. The disguises of alien conquerors and spies alike fall apart through the eye of the Green Camera. Also, it has a blinding flash that can be useful. With all this, Callahan is able to once again fight for truth and justice.

This is a pretty straight-up Green Lantern-inspired hero. I’ve always liked the image of the (I think) Golden Age Green Lantern carrying the big lantern around, so that’s why the Green Camera here gets a big bulky device, instead of a little ring (or camera phone).