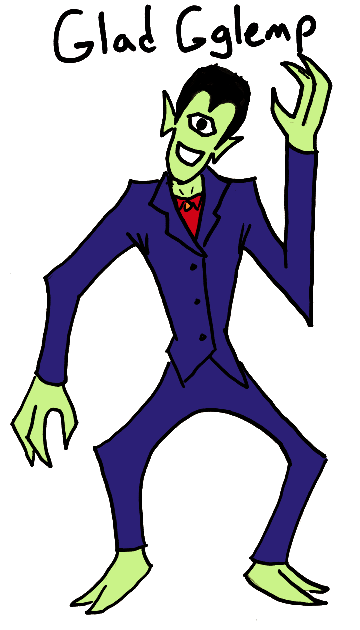 The Gglemps. Strange beings from some strange dimension, they occasionally turn up on the Earth to enact some evil scheme or another. Most often they are seeking silver and gold, rare elements of mystic power on their home world, but this otherworldly duo is not above returning to Earth just to take a shot at revenge on some hero who has foiled their schemes in the past.

Each Gglemp has a single eye (capable of seeing thermal heat), claws, and tough greenish skin. Each is over seven feet in height. They could not easily blend in to a crowd of humans, but they generally don’t bother to try. Though neither is fluent in any Earth language, they have both picked up bits and pieces of English, German, Urdu, and Russian, so they can have grown capable of communicating with humans. Unfortunately, that has only lead to them agreeing to work alongside some of the world’s other supervillains, like the Besuited Beast or Sorcerox.

First, the apparent leader of the duo, is the ever-smiling Glad Gglemp. Agile and lanky and prone to sudden movements, the Glad Gglemp is the more talkative of the duo. It is the one that is more likely to communicate with humans, be they victims or allies. The Glad Gglemp also seems to have some skill as a prestidigitator and can throw a blade before the victim even knows it is coming. 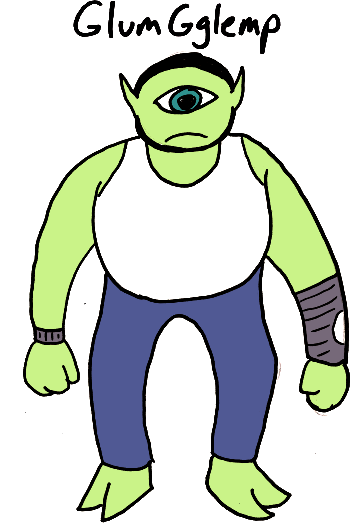 The Glum Gglemp, incredibly strong, unbelievably tough, and terribly morose. It does what the Glad Gglemp tells it to, but doesn’t seem to be just dumb muscle. The Glum Gglemp is often the one who has to get into the fights when a superhero shows up, but it is also the one who seems to understand more about Earth-technology. The Glum Gglemp is the one who can commandeer a vehicle or work a phone or computer when such a thing is needed.

Almost nothing is known about the strange dimension from which the Gglemps hail, but a magical hero called the Danger Mage once traced the energy of the portals through which they generally arrive. Hoping the find something in their world that could prevent them from returning to Earth, the Danger Mage used his magical knowledge to open another portal to the same destination and went on an investigative journey. He never returned. Only a panicked mental message to his assistant to “Close the portal!” to give any indication of what had happened.