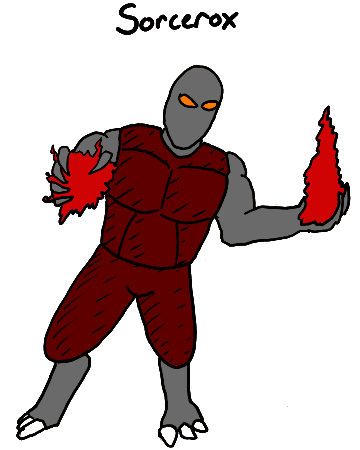 A life-long coal miner, Karl Jandacek was caught in a mine collapse. Caught in a pocket, his foot pinned under a rock, Karl watched in horror as some sort of liquid seeped into the cave and began to fill what space he had. It looked like he would drown. But he did not.

Instead, as the strange fluid finally submerged the wounded man, it caused a burning sensation. Karl soon lost consciousness.

When he came to, Karl wasn’t Karl anymore. His body had changed. He looked down at his clawed hands and grey skin from new eyes and noticed that he could see things he could not see before, mystical energy fields that permeated everything around him. And he could affect this energy. 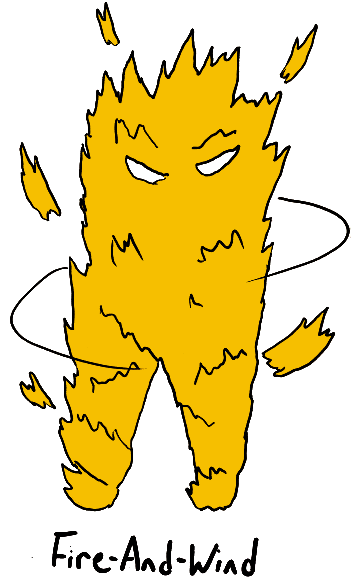 The people on the surace assumed Karl Jandacek had died, but instead he wandered further underground to test his powers. When he dug himself out a year later, he was Sorcerox, a sorcerous monster intending to conquer the world.

To serve him, Sorcerox has created two mystical monsters, Fire-And-Wind and Water-And-Rock. Each with the powers of the elementary materials of which they are made. Fire-And-Wind is a flying flame and Water-And-Rock is a flowing torrent with a stone core. While these are beings of rudimentary intelligence, they have developed a sort of personality. Fire-And-Wind is a reckless, impulsive, angry creature. Water-And-Rock is more patient, more calculating, more cunning. Together, these elemental enforcers make a powerful pair, a threat to the heroes that oppose Sorcerox. The primary line of defense against Sorcerox’s villainous invasion is the wizard dog Wizardog, who makes a point of digging up the villain’s schemes and routing them wherever they turn up. 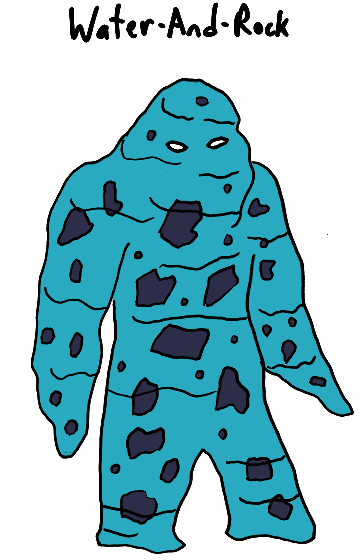 Okay, behind the scenes stuff: Sorcerox was another one of those unnamed sketches that I found among my files and decided to give a name and a story to. He looks more like something I’d been trying to fit into a more generic (and probably terrible) fantasy story, but I figured he could work in the context of a superhero story just fine. To that end, I tried to give him a more standard supervillain origin (a blue collar worker who has an accident and gains powers is Electro, for example). I didn’t quite nail it, but I like how it turned out well enough.

The two elemental monster things I just drew because, once I’d had the idea, they seemed like they’d be easy to draw (and it is easier than drawing people, even if they aren’t too indicative of their nature). I thought that they’d be henchmen for some mad scientist character, but when I sat down today to write some villains up, it all looked like it fit together.