Another pair of characters from the supporting cast of Justice-Man, a superhero I created as a child. 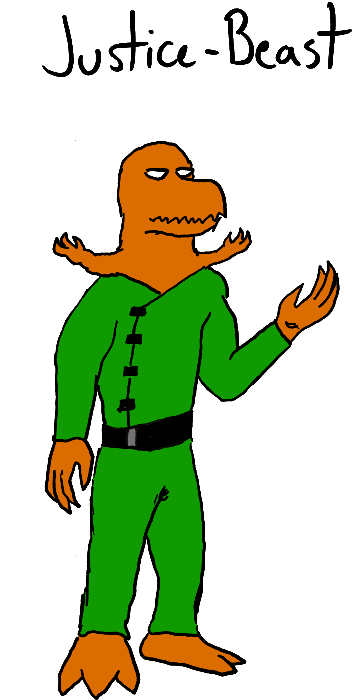 In a world where superheroes are common place, criminal groups have to try harder to keep up. One such group made an effort to create its own supersoldiers by experimenting on mercenaries. Some of these mercenaries wound up with useless mutations, some got actual powers, and some died. The one that was once known as Joe Curtis, with his lizard-like appearance and tiny additional hands, did not seem particularly useful to the crime scientist, so he was euthanized and left in a mass grave. That wasn’t the end, however, as other, slow-acting powers would not only keep the Beast alive, but help him to escape into a nearby town. With only scattered memories of his life Curtis was confused and afraid and angry. He attacked people when he encountered them, and that brought Justice-Man to the scene. While preventing the Beast from harming anyone else, Justice-Man noticed signed of intelligence in the monster and reached out. Perhaps because Justice-Man himself had been created by evil interests, the two were able to bond and, after getting the help he needed, the Beast became Justice-Beast and served alongside Justice-Man in opposing crime.

This guy was created when I took a little monster finger puppet (of the sort that turn up on Google for that phrase even today apparently) and stuck it on the head of a G.I. Joe figure. I don’t think I had much of a backstory in mind back then (at least, nothing survived in my notes) so the fact he was once a paramilitary guy is an homage to his action figure origin. What I liked most about Justice-Beast, though, is the idea that Justice-Man didn’t beat him up and toss him into a prison. Justice-Man was the kind of guy who liked to make friends out of enemies and this guy is one of those. 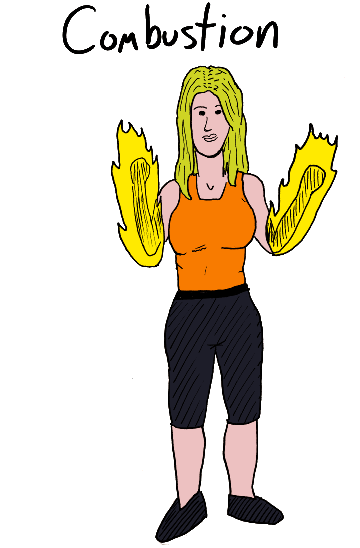 Jessica Faulkner ran away from home when she was a teenager and hasn’t been back since. Jessica Faulkner’s family is a fire-based twisted supervillain group. For several generations the ability to generate and control flame has been passed through this bloodline and, over that time, they have become an extremely successful crime group based out of New Zealand led by the Fire Queen, Jess’s mother. Jess wanted nothing to do with that. She left home and fled to America where she was trained by a retired superhero called Bill Q. Watson. Taking the code-name Combustion, Jess fended off her family and their agents when they first wanted her back, then wanted her dead. Combustion did not only fight her own battles, though. She fought crime and corruption wherever she found it and that was how she became friends with Justice-Man and Justice-Woman. Lifelong friendships were formed and Combustion continues to do as much good as she can to offset the evil done by her family.

Combustion is more of the “big breasts and tight clothes” character type than I generally try to create, but that’s okay. The current state of superhero comics may ignore any idea of female characters that don’t fit into their idea of beauty, but my idealized superhero situation wouldn’t fight that by turning the “pretty people” into the new ignored group. There are pretty people in the world and, while not all superheroes should be them, some should. I should, though, make note of something here: as a kid I created a lot of characters whose hands and forearms would be obscured by fire or energy or whatever. It made them so much easier to draw. Hands suck. Especially fingers. I hate drawing fingers. (I reused this for the Volcano Rabbit as well)