Two superheroes this week! I created this duo as a duo, so they’re a duo. One is superhumanly strong and tough, the other quick and agile. One can punch through a bus, the other can jump over a bus. They fight crime. They are:

We’re not even a month into this thing and I’m already presenting my second rabbit-themed character. What does that say about me?

I have mentioned in the past that I made a comic about a guy called Zappo back in elementary school. What I haven’t brought up yet is that on the inside cover of that comic I, emulating what I saw in real comics, created an advertisement for another comic. That advertisement was for the adventures of Rhinoceros Woman and Rabbit. That makes these two among the very earliest superheroes I ever created. Still, this is probably the first time that I’ve drawn them since. I don’t have that Zappo comic any more, which is a shame, but I still have a pretty good memory of how these characters looked. Rhinoceros Woman, with her shoulder pads and horns, and Rabbit’s weird sunglasses/angular ear-like-things are exactly the mental image that’s been in my head for about two decades. Rabbit is pretty ridiculous, I admit, but I’m pretty proud of the fact that Rhinoceros Woman, probably the first female superhero I ever dreamed up, is not the standard “Hot Woman” that 99.99% of female superheroes are. 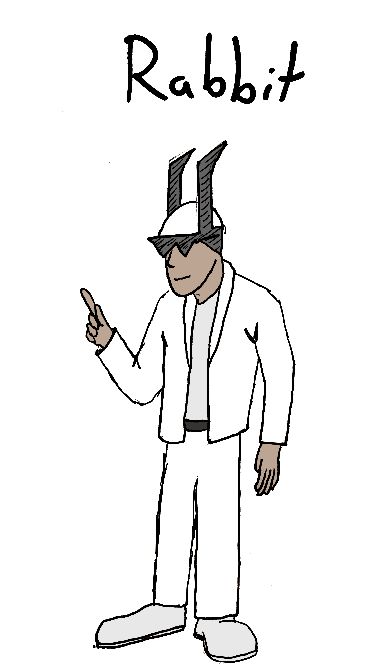 I’ve always been a fan of male-female friendships in fiction that ARE NOT given any kind of sexual tension. This is probably the rarest kind of relationship depicted in our society. I’ve bet we’ve seen more “innocent child/alien or robot” pairings than truly platonic male/female friendships in movies or on television. But these two are friends, partners in crimefighting, and nothing romantic. That said, at some point, probably well after elementary, I decided that Rabbit was probably gay. That helps to reinforce their just being friends, obviously, but it also defeats the significance of the platonic-ness of their relationship. What I want is more relationships between heterosexual man and woman who are nonetheless not in a Will They Won’t They plot. Still, there’ll be time for that in the future. For now, I’m also going to let Rabbit stand as the first gay superhero I created too.

I have never bothered to think up origins for these guys. If I ever need to, I will, but for now I’ve got a lot of room I could work with these characters. You’ll never know where to expect them to show up.