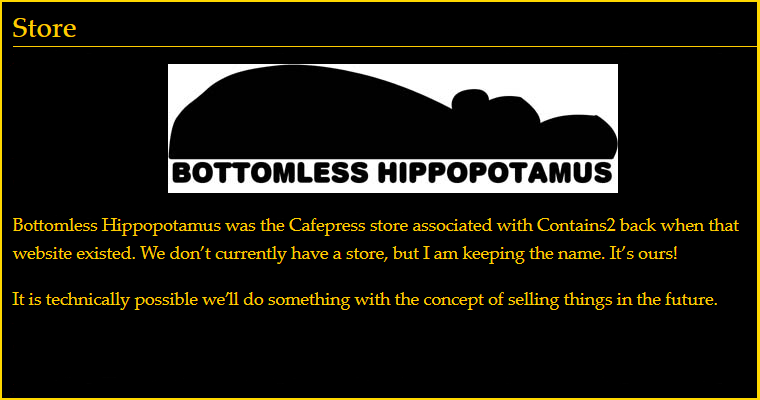 Nothing against Pete and Jeremy, but it bugs me to see nothing but Phone Guys going up on the site. For a while we had that thing were my Twitter posts would come here, but that’s busted I guess. Ah well, I’ll just have to actually post something to break things up momentarily.

Life continues about average for me. Financial struggles continue to govern my life, but at least I’m making good progress on several projects (because, as always, I am unable to focus on a single project at once). Here’s some updates:

Surrounded By Danger: The game I am making has gotten to a point where I feel like I would be realistically able to finish it within this calendar year. But the thing is, as it is right now, it’s a game about characters I created for SecGov Robots and the Beekeeper Chronicles. I love that cast and am enjoying making a sort of “Choose your own path” Story Mode game with them, but that is complicated and they’re not exactly universally known. So what I’m gonna do is restart the whole concept and make a Zombie Mode version of the game. Since the beginning I’ve been aware that the mechanics of the game are pretty good for simulating a fight against zombies. This should, if I don’t mess it up, allow me to create a version of the game without a Story Mode that can be put into production and actually get into the world while I go back to working on the Beekeeping version of the game.

The Many Monsters of Mackestry Manor: Another project I am working on is a franchise about a bunch of little monsters who live in a house. This one is aimed at very young children. I’d love for it to progress to the point of being a series of little adventure games, but that feels unlikely. What I am working on now is a colouring and activity book starring these monsters. That’s a much easier scale for me, and I honestly think I can have it complete by some time in October. Once that’s done I’ll begin work on a book that tells more about the monsters and see where we can go from there.

So while I’m toiling away on these and other projects, I’m sorry that the Phone Guys have the whole place to themselves.