Halloween is technically over, but I’m still in the spirit, so this week I’ll continue the Halloweeny-type characters: 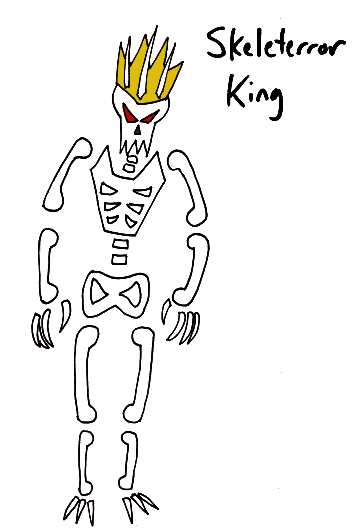 Foremost among the Hated Dead is their King. A lost soul so reviled he was banished from any proper afterlife to the Cosmic Ossuary, the Skeleterror King, in the form of a nine-foot-tall skeleton made up of Cosmic Energy, wants nothing more than to lash out at the living. With nothing else to occupy his mind, an army of several thousand like-minded servants, and a deathless eternity to scheme, it is only a matter of time before the Skeleterror Horde reaches the Earth, and begin their grisly slaughter.

I have to admit that a stronger way to go about this bit probably would have been to make a generic post about the Skeleterrors as a group, but I’ve kind of gotten myself into thing where I am enjoying designing individual characters. Anyway, I think skeletons don’t get the respect they deserve as far as monsters go. I’m going a strange cosmic direction here, but I’d love to see regular skeletons show up more often. They could easily take some of the roles that poor overtaxed zombies are getting stuck with. Surely, as fun as shooting a zombie must be, there would be some satisfaction in the crunch of bones being shattered in a video game? 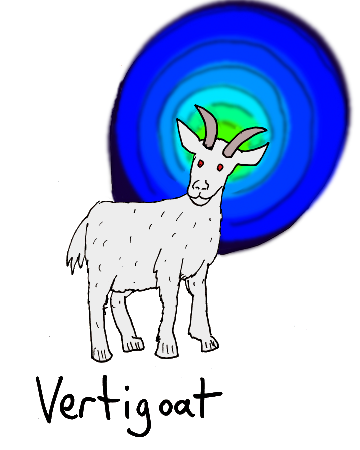 There is a goat, a seemingly ordinary goat, that wanders the country as it pleases. It belongs to no human. If any human should even come close enough to make it uncomfortable, the goat unleashes its power on them and the humans are rendered dizzy, nauseous, and often fall unconscious. Where did a goat come by such a power? If the goat knows, it isn’t telling anyone. All it is doing is spreading chaos as it wanders through our cities knocking people out as it goes, causing accidents and death in its wake. Who, oh who can save us from the Vertigoat?

You may say goats aren’t a particularly Halloween-themed creature. Yeah well. Okay, good point. Well, there he is anyway. I don’t have to care.