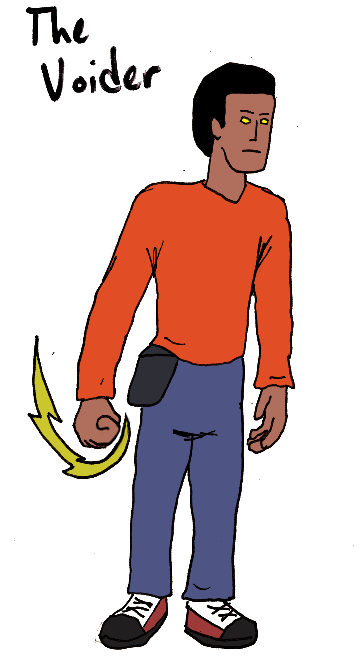 This is going to sound harsh, but someone has to say it: Devils are jerks. Sure, they seem nice when they show up and offer you some kind of great deal. Riches, fame, power to stomp down your enemies? That stuff is all really great, and all it costs is your soul? Well gee, you say, who needs a soul anyway? It probably isn’t even real! This smiling devil seems to know the score, he’s got a nice suit, and all he wants is your name, signed in blood, on this contract? Easy as pie!

And that’s how they get ya. The soul-buying devils are the con artists of the supernatural set, but one man is through with their nonsense. Motivated by nothing more than his belief that deceitful devils are being unfair to their victims, the man known as the Voider, apparently some kind of street-fighting mystic, has made it his life’s work to void as many supernatural contracts as possible. If possible he will help victims get out of their suffering by making use of obscure escape clauses and loopholes, but if that comes to a point where his only option is to hang out at crossroads at midnight and beating the holy heck out of anyone who shows up, well that’s just how it is going to be. 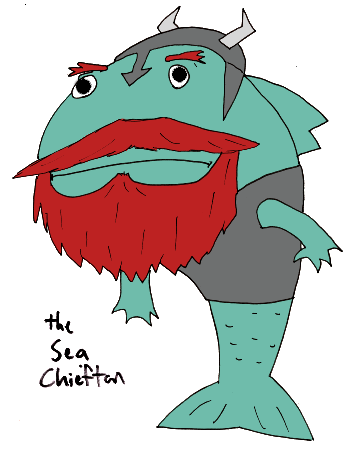 The Aqua-Vikings are a mer-people tribe that values strongness and toughness above all else. As it turns out, this means that many of the most prominent members of their clans are the ones who maintain more fish-style attributes. As you rise in the hierarchy, you find more scaled faces and webbed fingers. But when you reach the top, you find a merman who has barely any man in him at all: The Sea Chieftan. almost like a whale in size, but a shrimp in intellect, the boss of the Aqua-Vikings maintains control of the Secret Faction whose territory covers most of the Earth with his sheer strength. But beyond maintaining that control, the Chieftan has no real goals. He’s content to just tread water while the other Factions decide the fate of the world at large.

I’m gonna level with you: I spelled “chieftain” wrong at the inking point of the drawing and didn’t catch it because I hardly ever use the word. I could have fixed it when I noticed it, but instead I decided it was a character thing. I can do that. Nobody ever said I couldn’t.