If you only casually know about Superman stuff, it is entirely possible and understandable that you don’t know who Kelex is. Kelex is essentially Superman’s Alfred, but since Superman is a more sci-fi concept than Batman, Superman’s butler is a robot, so he’s also kind of Alfred and the Bat Computer all rolled into one. 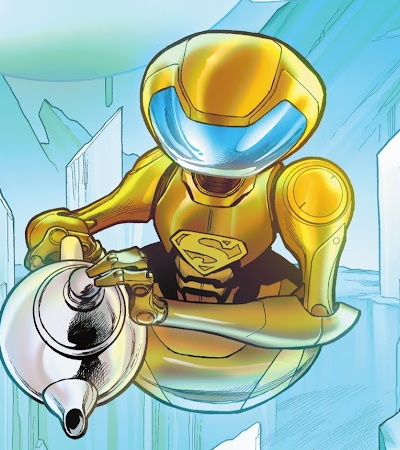 As with anything in Superman’s long history, there are contradictory explanations of Kelex, but there’s enough in common that we can basically distill it down to this: Kelex is a Kryptonian robot that belonged to Kal-El’s parents before that planet exploded. Through some manner or another, Superman acquired Kelex decades later on Earth and the robot now lives in the Fortress of Solitude to take care of things around there and perform scans and stuff.

This is all well and good. I like Kelex, even though most of his appearances consist of him either floating around the Fortress to make it look cool and futuristic, or being destroyed to show how powerful some threat is.

But that doesn’t mean we can’t do better. Here’s what I’d do to give us a perfect Kelex:

When we first learned the origin of Superman, we saw young Kal-El’s parents desperately trying to save their son while their planet fell apart in minutes. Over the decades stories have added to that simple concept by suggesting that Jor-El, Superman’s father, had had years of setup for this. Sometimes we’re told he’d scouted out planet Earth (or even visited it). He had sent out test rockets with dogs and monkeys. He’d made plans for what his son would do on Earth and so on and so on.

I hate all of that stuff. I like it when saving the baby in a rocket is an act of desperation by people who just couldn’t make the world listen to reason in time. They tried other ways to save Krypton for years and this is not something they were ready for. Now they have maybe ten minutes to save the kid via rocket, and that’s it. And maybe they need an AI in the rocket to keep life support systems in the running and steer it away from stars or whatever? And maybe they improvise by using the AI from the household robot? This works a lot better for me.

(Incidentally, I remember reading a script for one of the failed Superman film projects over the years (maybe it was Flyby?) and it included an AI on the ship called K. The movie was never made, but I felt this justified my preferred method of getting Kelex to Earth. I legitimately don’t remember what happened to K later in the script, though, so for all I know they turned him into Brainiac‘s stooge or something.)

Most of the most prominent tellings of Superman’s origins have Clark learning his origins from some sort of AI recreation of his father that was included in a crystal that came in the rocket with him. I don’t like that. In part, it’s related to my complaint above about Jor-El having accomplished way too much in what should have been far too short a time. But it just isn’t my preferred origin for Superman. Maybe it’s because I’m such a fan of the Golden Age Superman who didn’t know or question his origin much until he was an adult, but I like teenage Clark to be uncertain where he came from, let alone have a whole talking encyclopedia devoted to his origin. It also bugs me that the Jor-Elogram origin also tends to serve as a replacement for Clark going to university and I like Clark to be a student.

Here’s what I’d do: We have Kelex’s AI in the ship and perhaps he is damaged in the crash. Kelex is inactive for decades while Clark grows and becomes a superhero who doesn’t know his origin. At some point he learns of Kelex and activates it. Kelex becomes a sort of super-teacher from Krypton then, but isn’t an omnipotent repository of all Kryptonian knowledge, but rather a household robot that was damaged in a rocket crash. Kelex and definitely lay down the basics, reveal the name Kal-El, explain who his parents were, what happened to the planet, but Clark and Kelex will have to work together to learn more about what the lost world.

* I should clarify, I don’t mind Clark having AI simulacra of his parents at the Fortress when he’s an experienced hero who has been through hundreds of fantastical adventures. By that point in his career, those should be one of the most mundane things in the Fortess. I just don’t like it being a factor in his origin.

I think this is just something some writers like, having robot servants call the people they work for “Master”. Superman, as I prefer him, should never allow anyone to call him “Master”. I won’t say this is one that Kelex is always shown to do, I’ve seen him use “Kal-El” as well, but it has happened and I don’t care for it.

Kelex should have a protective attitude toward Clark, as if he’s a robotic aunt who is cooking for a child they used to babysit, but in no way should Kelex act like a slave of Kal-El. Even an employee relationship goes too far for me. They may not biologically be family, given that one isn’t even biological, but they are family. One of them just happens to like taking care of the Fortress of Solitude an awful lot.

Kelex Is Friends With Natasha Irons:

At some point in the 2000s there was a running joke in the comics where Natasha Irons upgraded Kelex’s program so that it would use contemporary urban slang. The main joke was that we were seeing an uptight robot talking “street” and that’s not how they usually talk. But it also gave Kelex a friendship that wasn’t related (directly) to Kal-El. I don’t know that Kelex would enjoy going out on the town (Kelex may, in fact, not enjoy leaving the Fortress at all by nature), but having a friendship with a tech-based superhero genius is an opportunity to socialize. I liked it a lot and want it back. We don’t need the “street” talk thing to continue, but it could. As long as Kelex has someone to talk to.

Kelex Doesn’t Get Along With Jimmy Olsen:

I just think it’d be funny if Kelex sees Jimmy and all his foolishness as a bad influence on Clark. That would amuse me.

This has been a long one. Maybe those four things won’t perfect Kelex, but I feel like they’re a good start. Look how Alfred is now this father figure who raised Bruce Wayne and serves as a father figure to him. Then remember that for the first four decades that wasn’t an aspect of the character. Until the 80s, Alfred was just some guy that full-grown Batman hired to butle his lonely mansion. If Batman’s Alfred can move from that to such a prominent role, then Superman’s equivalent character can be made into something really great.