It seems too soon to go back to the Scooby Doo franchise for the sake of another Beekeeper Review, but I’ve found yet another one in there and it’s an easy review, so here we go: 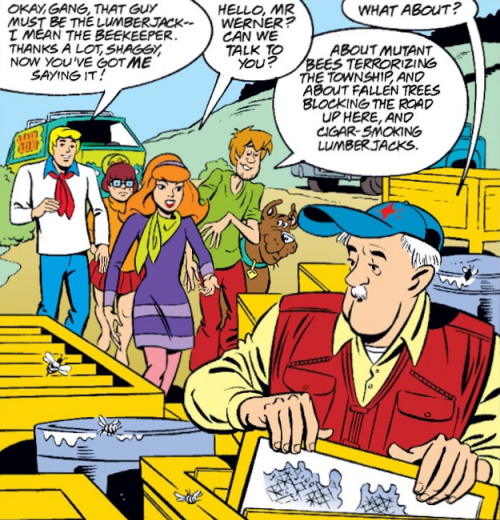 A small town is being ransacked by a bunch of giant monster bees. There are rumours that “the local beekeeper” is the cause of it all by going against nature and developing strange mutant insects. Mr. Werner, the apiarist in question, is being called “the Mad Bee Doctor” (in spite of the fact that he is not actually a doctor). Given the franchise, it should surprise nobody that when Mystery Inc. are brought in to investigate, they discover that Werner is actually being framed by costume-wearing criminals who want to disgrace him so he will be forced to sell the lakefront property on which his farm exists.

Mr. Werner’s Bee Farm seems to be very successful, he sells honey by the barrelful, so that’s a point to him. When he learns that he is being framed, he helps the Gang investigate, rather than waiting at the sidelines like a typical Apiarist in Distress. And his bees help chase and fight the criminals during the climactic confrontation. I do usually give points for a beekeeper that dabbles in science, and Mr. Werner does not, but overall he does rank as an above average beekeeper.

Three Honeycombs out of Five. I actually think this might be the last Beekeeper found in Scooby Doo to date, but I wouldn’t risk money on it.