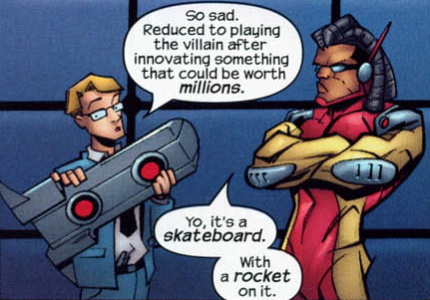 We know that Bob Farrell’s career as a super-skateboarding outlaw was motivated by noble desires to help his community, and we can tell that, when things are going well for him he absolutely loves rocketboarding around and having rocket adventures.

But when things are not going well for him, the first thing he does is insult himself and imply his Rocket Racer setup is as stupid as everyone thinks it is. On multiple occasions he has downplayed his technological accomplishments, claiming they’re goofy or childish.

So why hasn’t Bob changed his superheroic identity? Why not design new equipment that’s edgy and cool and not skateboard-themed? Well, I have my ideas, but unless I get to tell those stories I don’t need to let them out right now. But really, when he’s in a good mood about it all, he doesn’t mind that he looks goofy. He’s having a ball. When he does dislike it, he wants out of the whole super-scene, so why bother recreating his identity to something else? He’s either the Rocket Racer or he’s not playing.