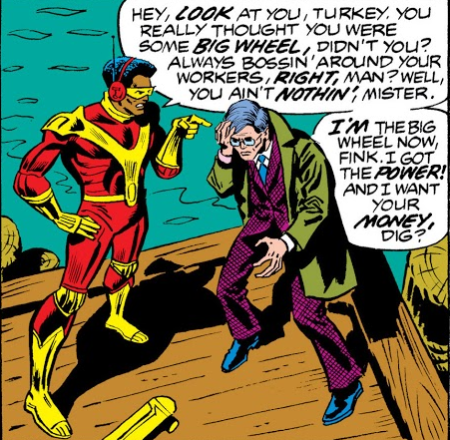 I’ve already gone over his career history, but want to make it clear that Bob Farrell’s motivation to act as the super-criminal called the Rocket Racer is less because he’s a “bank robbing supervillain” kind of criminal and more that he’s a “Robin Hood Noble Outlaw” kind of criminal. He’s not just robbing for his own benefit, and he’s not just robbing to help his poor family (though that would be enough to put him on the path to noble criminality already). Bob wants to be, or at least wanted to be, someone who would target rich victims and would redistribute wealth to his entire community.

The earliest of Bob’s crimes we know is stealing bonds and securities from Wall Street people, an obvious target when “robbing from the rich”. In his second appearance he’s already gotten into the crime-for-hire game and his first employer is an embezzler who had mistreated workers, so Bob blackmailed him for more money. When Bob is finally captured and put on trial we’re shown that the judge was lenient because of Bob’s “strong ties to the community” and that community was full of people willing to help him pay his bail for as long as they could. If the community loves Bob that much, he must have been doing something for them.

We don’t have a lot of specifics on Bob’s crimes after that, but we know that he quit for a time and what brought him back was seeing Spider-Man wrongfully accused of crimes and wanting to set that right. Trying to right an injustice like that is also very Robin Hood in style. After that, most of Bob’s career is spent on the mercenary side of the aisle, if not the “superhero” side, and we know what money he gets goes to his family and his schooling, but maybe some still goes to other people.

We know that Bob’s attempts at actually being a superhero have never really come to anything and he’s been seen doing crimes again. Nobody has bothered to focus on Bob in a long time, so we don’t know the details. I like to think that he just realized that punching things as a superhero doesn’t do the kind of good he wants to do. So he’s back to robbing, and hopefully his targets are still rich assholes.

(We can’t ignore the fact that Bob also grew to love the power and adrenaline involved with the super-criminal line of work. But that’s a discussion for another day.)