So far in my Planet Gurx series, I’ve covered a lot of information about the Strondovarians, the current dominant species of the planet, and not a lot about the planet Gurx itself. So today, let’s just lay out the history of the planet. (To avoid complication, we’ll be measuring in Earth years, instead of translating the system Strondos use to keep time.)

Roughly 6 Billion Years Ago: The planet Gurx comes into being around a star that the Strondos will eventually name “Ahan”. As time goes on, the planet is bombarded by meteors and oceans form and all that good stuff.

Roughly 4 Billion Years Ago: Multi-cellular life begins to form in the oceans of Gurx. Over time it evolves into what we would recognize as the Gurxian equivalent of animals and plants.

Roughly 1 Billion Years Ago: Complex life has spread through the oceans of the planet. While there are many types of animals around this point, one of the most successful and widespread is a family of four-sided symmetrical creatures with exoskeletons (Strondos will call this branch of the tree of life on Gurx “Vootuph”, or Four-siders). 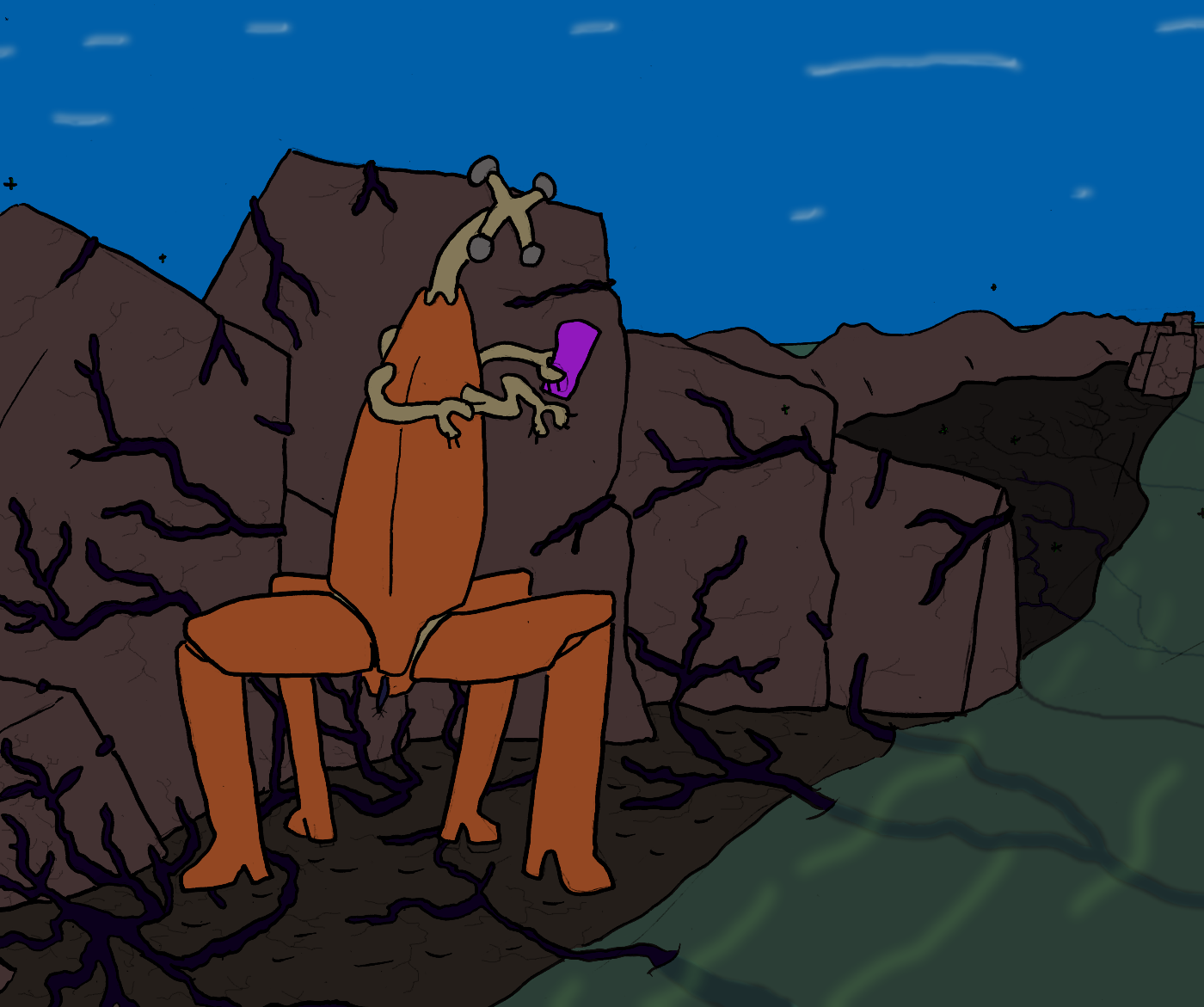 Roughly 500 Million to 250 Million Years Ago: Life has spread to the surface of Gurx, as plants and as Vootuph that have adapted to an aquatic lifestyle. Back in the waters one of the newer family of animals to come along has a body plan that includes musculature that functions as a skeleton and six limbs (“Lapaouger”). In the later years of this era a species of Vootuph will evolve traits such as community, tool-use, and intelligence that would be recognized as being on par with human or Strondo life, but their time is brought to an end by an extinction event that wipes out most of the life on the surface of the planet and a sizable chunk of that in the ocean as well. The Strondos know little to nothing about the intelligent Vootuph that once lived on their world.

Roughly 200 Million to 50 Million Years Ago: While Vootuph animals are not totally extinct, the Lapaouger group spreads into many of the evolutionary niches they once held, including eventually finding their way onto land and having considerable success. Some land-based Lapaouger evolve hind legs that allow them to stand upright and walk bipedally. This upright subsection of Lapaouger will be known as “Aehubar”. This is also the era when the Slimelands (“Chooeviv”) come into being.

Roughly 30 Million to 2 Million Years Ago: The ancestors of modern Strondovarians are using tools by this point, and by the end of this span they have begun to spread around the continent forming various tribes and communities, one such group becoming modern Strondovarians. The Strondos of today use the word “Varian” (meaning “folk”) to describe the closely-related species who had intelligence similar to their own.

Roughly A Million to 40000 Years Ago: By this point the tribes and communities of Varians have developed into nations and cities. Civilizations begin to rise and fall. The population of Varians on the planet grows frequently, but is often brought back down by natural disasters, disease, and war. This era will come to be known as the “Neboosidih”, which can best be translated as “the Times Lost To The Wind”. It was a time of struggle that ended with the only when the non-Strondovarian Varian species were wiped out by various means. In the ages that followed the Strondos were the only Varian left alive, and their dominance over the planet Gurx begins in earnest. 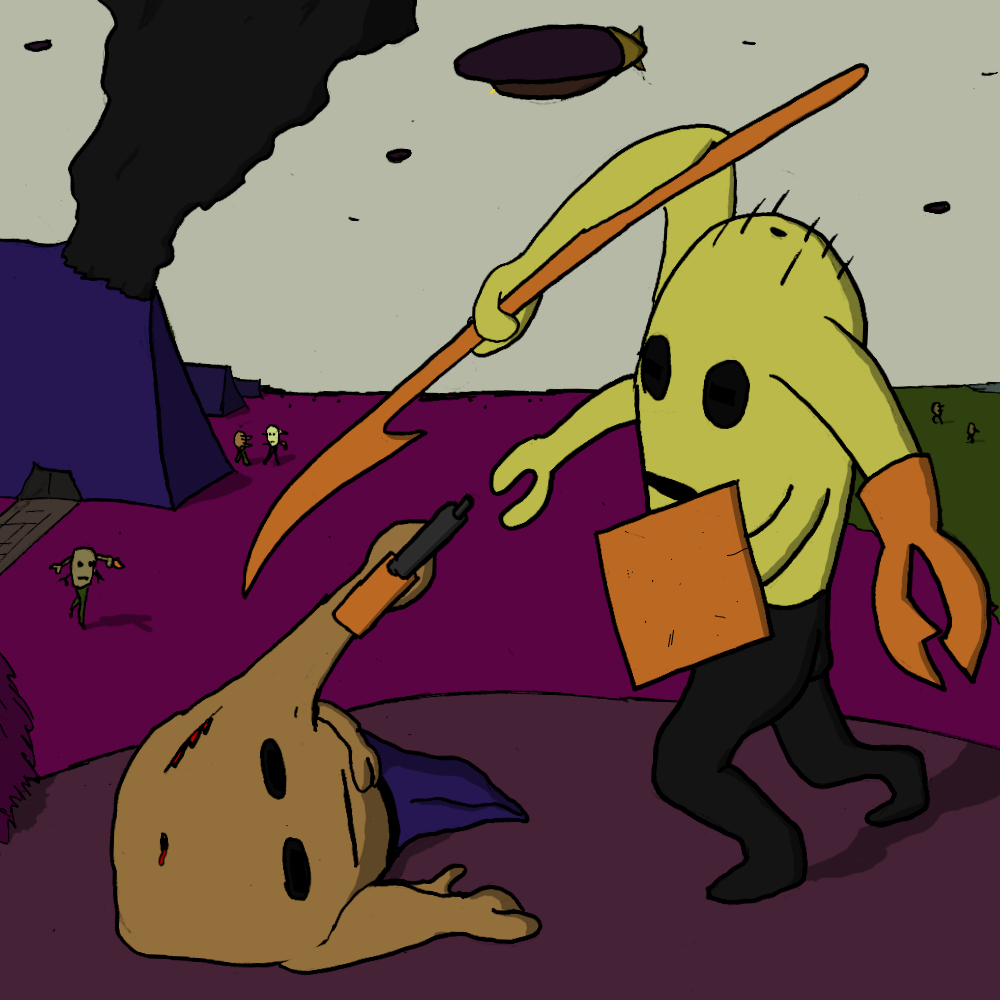 Roughly 12000 Years Ago: Among the nations of a more technologically-advanced Strondo population, a decades-spanning war wages. One Strondo nation, one that values knowledge and esteem more than anything else, is able to conquer or convert all the other Strondo nations on the planet. This results in the Strondo Culture that will create the Knowledge Base of the Strondovarians, the record of all information deemed worth knowing and remembering. This culture also makes a point of preventing the degradation of their language by enforcing strict rules and wiping out other languages.

Roughly 9000 to 7000 Years Ago: This is the era in which the Strondos reach out into space for the first time. They explore their own star system, and soon generation-ships are launched to other systems by those who want to be famous for founding cities on other worlds. The spread of Strondos to other planets is helped by advances in suspended animation and, eventually, the “Buloggo Engine” is developed, which makes travel to other star systems much more easy. On one world (“Doaphean”) Strondos find living alien animal life, though it seems unintelligent by their standards. They begin colonizing Doaphean.

Roughly 6000 Years Ago: The Strondos make first contact with a species of similar intellect to themselves and it does not go well. The newly-met species, which the Strondos call “Rootfolk” (“Pwot Pharvarian”), seem to have values incompatible with those of the Strondo Culture and conflict arises. To make matters worse, that contact is noticed by other even more powerful alien forces and Strondos and Rootfolk are both pulled into a Great Cosmic Conflict that, to this day, they still don’t fully understand. The Great Cosmic Conflict waged for more than a thousand Earth years, during which time the Strondos put utmost importance on keeping the location of their homeworld a secret from their foes, though the settlements on Doaphean suffer unimaginable losses. Eventually the conflict seemed to cease on its own and Strondo Culture returned to its exploration of the systems it could reach, now aware they had enemies.

Roughly 3000 Years Ago: It is decided among the Strondovarians that the planet Gurx is not good enough to be the capital of Strondo culture. Thus began the biggest project in the history of the species: the creation of a new homeworld from scratch. A better star is chosen and space stations and asteroid bases are built there. A large segment of the population makes a pilgrimage to the new system and take up roles in what will surely be a historically noteworthy mission.

And that brings us to today. Strondo culture, as intentionally stagnated, combined with the fact that there are Strondos alive who were alive when the New Gurx project was begun, means that the planet Gurx of 3000 years ago is remarkably similar to that of today. And the Strondovarians have no intention of changing their plans any time soon.