The Strondovarians (and, indeed, most life on Planet Gurx) don’t have the biological sex differentiation that we see here on Earth. Every Strondo has the same reproductive organ (they call it a Thebwont), which is located between their legs inside an orifice from which it can protrude when needed for copulation. The Thebwont has bits for expelling genetic material, as well as bits for receiving it. During copulation, a Strondo’s Thebwont docks with their partner’s Thebwont and they exchange their material and take it into themselves, where impregnation can happen. 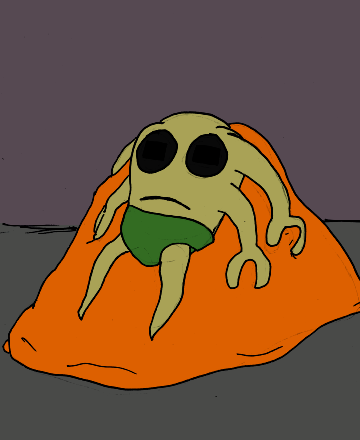 Unlike humans, while a Strondo is pregnant they can not copulate, so it is fortunate that they don’t place the value on sex that we do (they like it fine, but their hedonistic tendencies more often point toward eating and mind-altering substances). The Thebwont undergoes a transformation during pregnancy, taking on the role of a womb. Gestation lasts for about six Earth-months (I’m just going to use Earth times for now for ease of translation) and the infants (usually one or two at a time) are born live, after which the Thebwont will return to copulationable form. If a Strondo has been pregnant about five or six times, the Thebwont can become incapable of the transformation, leaving the Strondo still capable of performing the sex act, but sterile.

Here we see Nibnassin, our Strondo volunteer, as an infant from an old family picture. The intricate musculature and large brains of a Strondo are still developing when they are newly born, so they need a lot of help for the first couple years. Fortunately, Strondo parents (the Strondo who gave birth being the one considered the parent) are usually quite attentive. 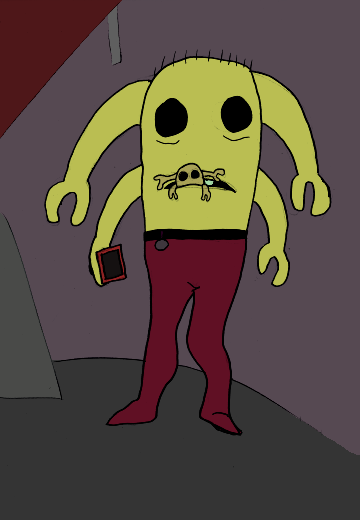 For about the first five years of their lives the young Strondos are in a “toddler” stage, learning to walk and move and speak and all that as they get bigger. Here were see young Nibnassin hanging out in their parent’s mouth, which is a common thing on Gurx. Because things in the mouth cavity aren’t digested unless the Strondo consciously focuses their Rel tow the task of pulling it apart and forcing it into the stomach, it’s actually a safe place for Strondos to store things, including their young kids. While in the mouth cavity the young Strondo can share food being eaten by the parent and, in the process, pick up valuable bacteria from their parent to develop a healthy gut biome.

After about five years the young Strondos are usually too big to fit in their parent’s mouth anymore, but that’s okay because they’re also now able to walk and move as deftly as they would be for all their life. They continue to grow until about eighteen to twenty years, at which point they reach their mature adult size and would now be capable of reproduction.

An average natural lifespan for a Strondo is about 120 Earth years, but they rarely live by their natural standards anymore. Technology has advanced enough for the species that the lifespan can be extended in various ways, including suspended animation used, most often, in space travel. There are Strondos out there who were born over three thousand Earth years ago, but most of that time was spent in stasis.