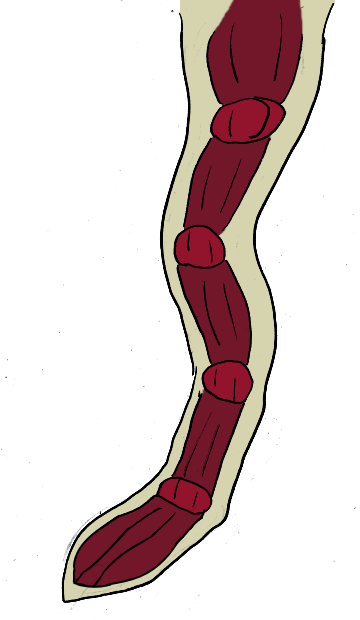 Strondovarians stand bipedally on legs quite unlike those of human legs. A human seeing a Strondo’s legs would think they look serpentine and bend all wrong, but that’s just how they function.

As I’ve said in previous posts, they Strondos don’t have skeletons as we know them on Earth. Instead they have an interlocked system of dense muscles, tendons, and sinew that support their weight and can push and pull against each other to achieve movement. This setup allows for their limbs to be extremely flexible.

Here we can see a rough, simplified look inside Nibnassin’s leg. The multiple “knees” in a Strondo leg are clumps of muscle able to swivel in multiple directions and also to “lock” so that they remain in a certain position while other muscles use them as leverage for moving themselves. The longer muscle masses in the legs can rotate and stretch or contract as needed. The primary function of this design is to be able to shift around and funnel the weight of the Strondo to the “sole” where the leg actually comes into contract with the ground while keeping the torso at a generally consistent level.

When walking, the weight is shifted to one leg and then the other end probes forward to find a foothold. When that foot is planted, the weight shifts and the other leg catches up. This is all done with minimal conscious awareness from the Strondo. It would look strange to human eyes, but rest assured they would find our endoskeletal lumbering just as strange. 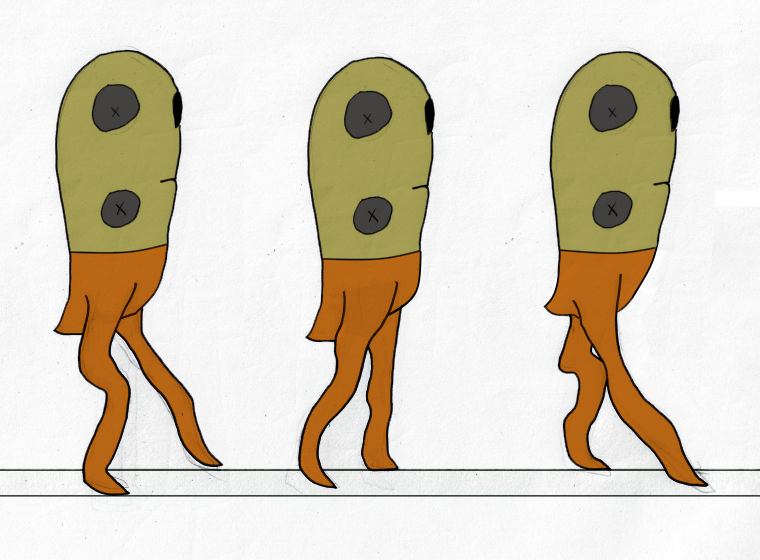 Strondo hands are similarly flexible, but I don’t think we’ll need to get into a post all about it at the moment.

This bodyplan, with these flexible legs making it possible to walk bipedally, has proven quite successful among Gurxian life in the current age, with many “animal” species being part of this type. They’re called “Aehubar” in the Strondo language. We’ll get to non-Strondovarian life on Gurx at some point down the line. Although there are Aehubar that can jump quite well, Strondovarians are not among them, with most not being able to jump at all.