It’s not technically correct to call this organ a tongue, so I think I’ll use the Strondovarian word, the “Rel”. The Rel is positioned on the roof of the Strondo mouth and serves multiple functions. Let’s examine the Rel of our volunteer, Nibnassin: 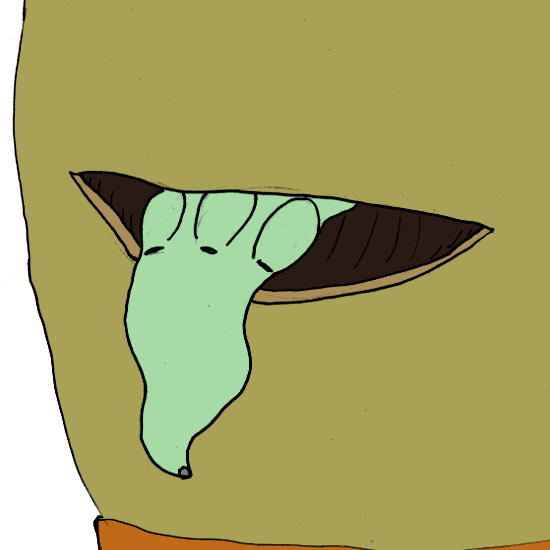 Here, Nibnassin is straining to stick their tongue out as far as possible so we can get a good look at it. It’s a pretty flexible muscle organ, but spends most of its time inside the mouth. It does have a saliva-like secretion that can help break up food (in some Gurxian animals that saliva is also sticky so it can catch small prey, but not in the Strondos). When a Strondo is holding a piece of food in their mouth cavity, the Rel will poke at it and mash it around, making it easier to transition it into the stomach.

But the Strondo is also a sensory organ. The Rel is covered with cilia-covered sensors that picks up sound waves. In conjunction with the sensory organ around the breathhole on top of a Strondo’s head, they can get a stereophonic sense of the world around them, though less so than humans. In spite of their weaker hearing, the Strondovarians do have a spoken language akin to humanity’s many such languages.

The other sensory purpose of the Rel has evolved to help them speak that language. The base of the Rel is ringed by sacs which can intake air and examine the particles in them, like the olfactory system in humans. This is their sense of smell, and taste, that lets them enjoy the food being pummelled by the Rel and, as noted when we looked at the lungs, the Rel’s air-intake is not at all connected to the respiratory system. The second use of these sacs comes when they release their air: they make sounds. That, combined with the echo chamber of their mouth cavity, is how they make speech. It is a breathy language and, because one of the sacs can be taking in air while another is letting it out, they can speak interminably without our need to pause to inhale. (It’s worth noting that there is an enforced monoculture among the Strondos. Only one language is permitted to exist.)

So that’s the Rel. A tongue, several noses, an ear, and a voice all in one. You can tell a Strondo is paying attention when their mouth is open, so the Rel has its clearest sense of the world.