Picking up where we left off last time, let’s take a look at (simplified PDR-style drawings of) what it looks like inside Nibnassin, our Strondovarian volunteer. 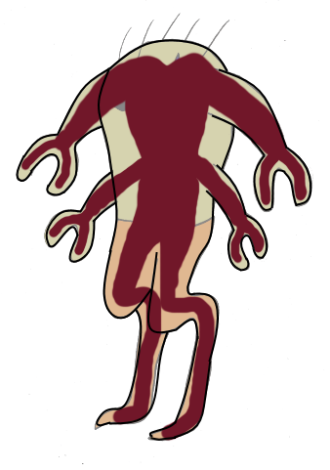 Strondovarians don’t have skeletons. Their bodies are supported purely by a system of sinew and muscle. The gravity of planet Gurx is less than that or Earth, so they can support a denser mass of muscle than Earth-bound beings. Their legs are an especially complex system, but I’ll have to give them their own post sometime. 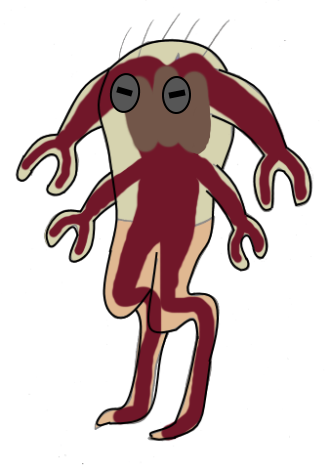 Here we see the three-sectioned Strondo brain, as well as their eyes. Note that the sclera of the eyes is usually darker than this, but it’s been lightened so that we can make out the pupils. 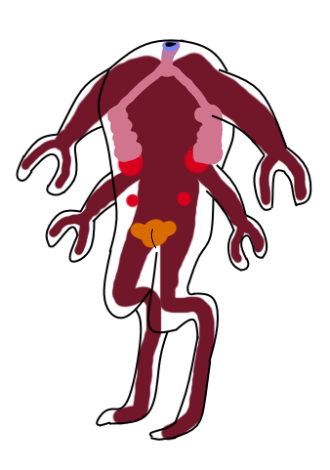 The breathhole on the back of the Strondo head is connected to two lungs, one on each side of the Strondo’s brain. Around the entry of the breathhole is a sense organ the main purpose of which is to test the temperature of the air, but which also does pick up a bit of audio input (Strondo hearing is not as strong as human hearing). There are four hearts to pump blood through the Strondo body, two of which are directly connected to the lungs. The reproductive organ is positioned between the legs and can expand through an orifice to exchange genetic information with a partner, or it can take in genetic information from a partner and use it to create new life, which is gestated inside for a time before being born live, though significantly smaller than a human newborn. 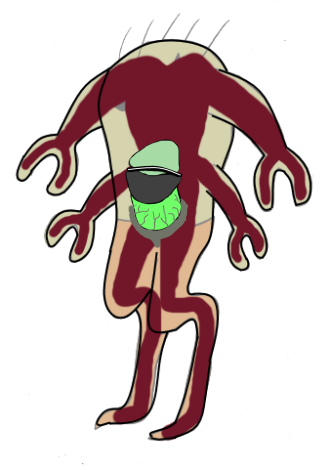 The top of this group of organs is one which we can call a tongue, but which is actually much more complex than that. It, like the legs mentioned above, will merit its own post, but in brief it is involved in eating, hearing, speaking, and smelling. Below the tongue, right behind the mouth opening, is a cavity in which food is kept and picked apart by the tongue, to be dropped into the stomach, which is that acidic organ below the mouth cavity. The stomach essentially works like that of humans, and leads into a short digestive track that pumps the good stuff back into the body via the lower hearts and pumps the bad stuff out through the tube in the rear. 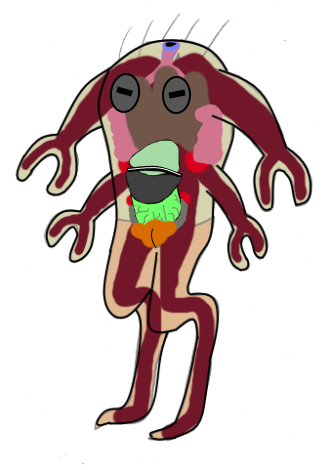 Here we see as many of those organs as we’ve covered thus far. There are other small organs in there as well, but this is getting long again, so we’ll not worry about them right now. 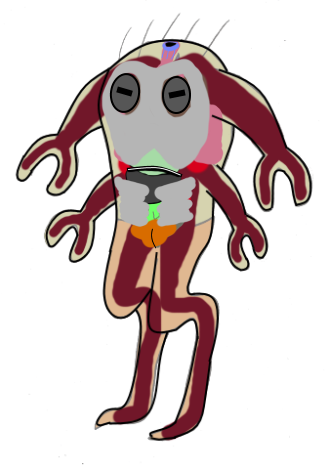 But before we wrap up for today, we should note that even without a skeleton, the Strondos do have some hardened plates held in place by their musculature that have developed to protect the vital organs from the front. From behind, these organs are already protected by the dense musculature. None of these plates are as strong as the human skull, but combined with the leathery skin of a Strondo, they do alright.