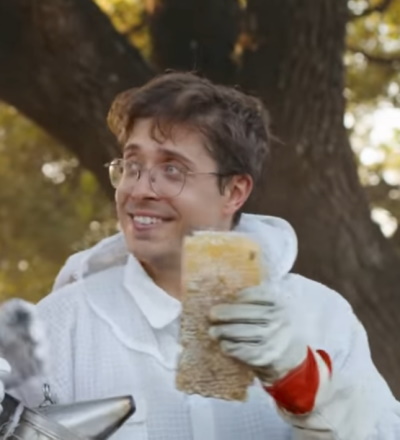 This is absolutely a case of me reviewing another perfectly normal human beekeeper. We see a couple of hives, but we can’t tell if he has a sprawling successful apiary of it this is all it is. Sure, he does some stuff that, were I was feeling generous, I could construe as hinting at supernatural. First, it’s worth noting that he removes his mask just before opening the hive to take out a honeycomb. This, I could claim, is a sign that he is immune to stings or whatever. Also, I notice that he offers Jake the chance to “meet” the queen, rather than just see the queen. If I were making my claims, I could infer this to mean Daniel has the ability to communicate with the queen. But I need to be an honest reviewer of Fictional Beekeepers. Daniel doesn’t seem to be supernatural, in spite of my wishes.