We’ve got Beekeeper from a Star Trek comic book today. An alien beekeeper! Potentially the first keeper of alien bees I’ve reviewed. Fantasy world bees would technically be different from Earth bees, but they are treated the same in their stories. These are actual alien bees. Anyway, here’ goes:

The planet Njura is the largest planet in its star system and is home to the Njuran peoples. Long ago the Njurans established colonies on the other four worlds of their system and, for nearly a thousand years, the colony worlds were ruled by Emperors based on Njura. The last of those Emperors was Kring. Kring ruled during a period of bloody rebellion in the colonies and, indeed, he was overthrown. With the colonies now free, Kring was no longer the Emperor, but was elected President of Njura in an actual democratic election.

During the peaceful era of President Kring the Njurans began talks with the United Federation of Planets and accepted a visit from the USS Enterprise. When Kirk, Spock, and McCoy pay a visit, Kring proudly showed off his apiary, where he keeps the Njuran equivalent of bees, who produce a substance called varta, which is their version of honey. Varta is pink, but is still used in cake recipes and to sweeten tea and presumably other ways similar to our use of honey. But Kring isn’t just content to harvest varta. He actively breeds his bees to create new types. It’s clear he is very much into beekeeping, which is strange given how much it doesn’t come up at all in the rest of the story. 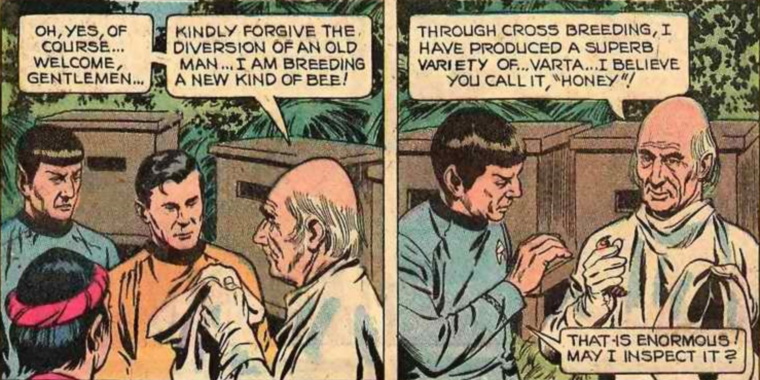 During the Federation’s visit, Kring threw a parade to show off all the agricultural ships and stuff he’d be giving to the colonies. Except, Spock figured out, it was all actually disguised military stuff. Kring was attempting a reconquest of the colonies and he was doing right in front of everyone. Oddly, after Kring is exposed, Kirk just assumed he had “learned his lesson” and the Federation team lied to the Njurans, creating a fictional villain and claiming that Kring had actually saved the day. After that, Kring earned the title “Keeper of the Peace”. It’s a weird little story.

Review time: Kring is objectively good at his apiarist craft, and he’s got access to technology perhaps not as advanced as the Federations, but better than we’ve got. He must have something going for him given that even after his defeat during the rebellion he is made President and rules in a time of peace (and given that Kirk was willing to cover for him). But that attempt to recapture the colonies really hurts his score, no matter how quickly he accepts his failure. At best I could say this was a case of succumbing to Beekeeper Rage. At worst, Kring is a straight-up supervillain. I wish I could rate him higher, but I cannot: