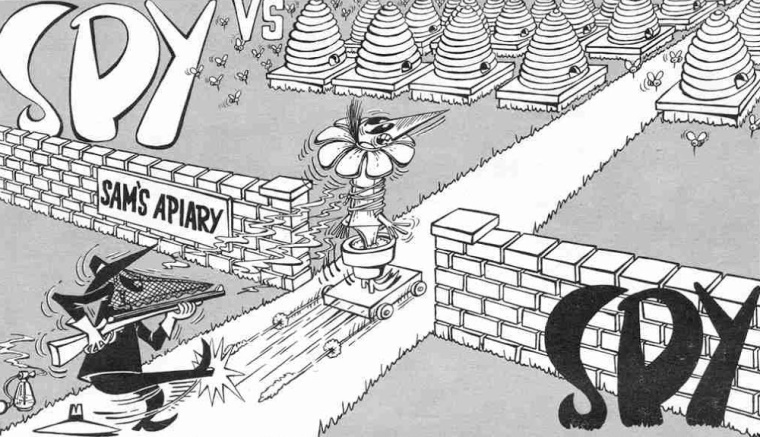 We never see Sam. We’re not told anything about Sam. This single panel from the title section of a Spy vs. Spy strip is all we ever see of Sam’s Apiary. But I have to be thorough in my reviews, so it’s got to be done.

First we need to ask: Does Sam even exist? The titular spies spend a lot of time and effort setting up traps for each other and establishing a fake apiary would certainly be within their typical hijinks. But this scenario doesn’t seem to involve any such trickery. The Black Spy has simply tied up his enemy, make him appear to be a flower, and pushed him in among the hives. I think this was an existing honey farm and that Sam is indeed real.

Sam’s got to be pretty good. They’ve got dozens of hives on the go and the bees seem to be healthy. And they’ve achieved this level of success in a world where the Black and White armies are causing damage all the time every day forever. That’s impressive. But we just don’t know enough to rank Sam as anything more than an average Beekeeper.