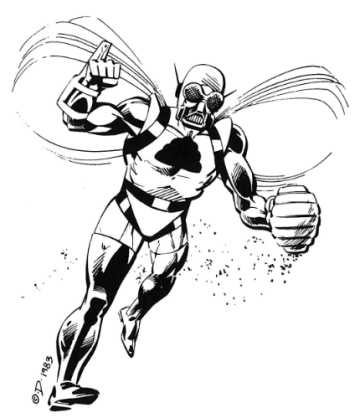 Louis “Lee” Sanchez is a supervillain who appears as an opponent in the roleplaying game Villains and Vigilantes. Before he was a beekeeping supervillain he was a boxer and a movie star and was quite successful. Unfortunately, during that period he got caught up in a world of illegal drugs and firearms. This ended poorly for Lee, causing his career to come to a halt, leaving him poor. Eventually he got a job as a security guard at a scientific company, only to steal their experimental “bio-electric suit” which had been designed to control killer bees. He had originally intended to ransom the suit back to the company, but after wearing it he took a liking to the powers it granted and opted to keep it and begin a career as a supervillain called The Beekeeper!

Apart from his own prowess as an athlete and a fighter, Lee’s suit allows him to control his bees, to fly, to shoot “stingers”, and it enhances his strength. It is also noted that he has an ability to detect the weaknesses of his opponents, but it’s not made clear if that’s a result of his experience as a pugilist or a function of the suit. He’s got a weakness to insecticide though. It is noted that he’s smart enough to use his bees to scout out locations before he gets into problems, which is smart, but otherwise he only uses his bees when they’re necessary, otherwise preferring to do his work on his own.

Lee definitely has some typical Beekeeper Rage on display. It’s said that he has never really recovered from his fall from grace and will be enraged by people who mock him or imply that he’s a loser. That said, it is also noted that he has become very protective of his bees, whom he feared at first but has since come to see as loyal friends, unlike those who abandoned him when his life went bad. The sourcebook specifically notes that “if many of them are harmed he becomes enraged enough to kill.” Though more justified, it’s still Beekeeper Rage, but it does also show that in spite of the fact that he began his career as a “controller” of bees, he has come to see them as partners in his life. That wins some points with me.

3 Honeycombs out of Five. But keep in mind that this is a character in a tabletop roleplaying game. If the players and game master did their things right, they could spin adventures in which Lee turns out to be a cosmic-level beekeeper and it’d be as valid a take on the character as any other. He could become a hero. The possibilities are endless.