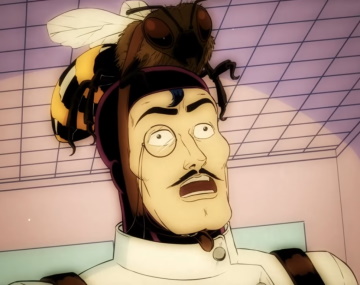 The question I need to tackle in this Beekeeper Review is this: Is Dr. Bees even a beekeeper? Here’s what we know about Dr. Bees: His real name is Dr. Miles Manners and he’s a beelologist and he is the wasp-themed superhero known as the Striped Stinger. But he has a secret identity. He is Dr. Bees! In his own words, Dr. Bees is a “masked vigilante with a load of bees, dedicated to saving mankind.”

Dr. Bees’s costume has a hive built into it, and he keeps bees in jars and briefcases just in case he comes across any problem that he might be able to solve by the judicious application of many bees. His bees seem healthy enough, so perhaps he is capable of beekeeping. But, if anything, he seems less interested in keeping bees than in giving them away.

In a follow-up cartoon we learn that Dr. Bees also has a comic book based on his exploits. When he’s told to tone it down on the bees, he argues that “Bees are my art!” The guy likes bees, I’m saying.

It’s shaky ground, but right now, based on the fact that he’s generally got bees around when he needs them, I’m willing to say, Dr. Bees probably counts as a beekeeper.

Oh right, but even if he is a beekeeper, he’s inept. His use of bees never actually saves the day. In both cartoons he’s dead by the end. Why, I almost suspect that the whole point of these cartoons is what an absurd joke he is. Sorry, Dr. Bees, but we take beekeepers seriously around these parts. I guess I can’t give him more than a minimal rating.

One Honeycombs out of Five. Bee-theming is not enough to count as a good beekeeper.