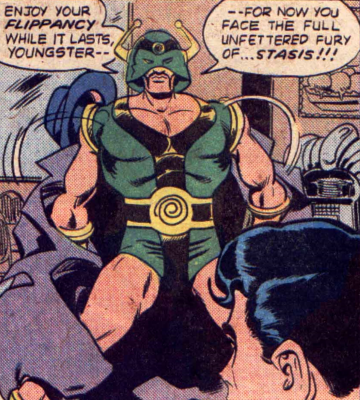 Stasis is probably the least justifiable of the villains whose return I am calling for in this batch. He appeared only once, in a minor Superboy story and there isn’t much to say about him. He had invented a helmet that allowed him to put people into stasis (basically a non-ice freeze ray). He was beaten when he was tricked into freezing too many people and he was unable to maintain his concentration.

Everything else I see in the character is something I am putting there on my own. But I will make my case.

I see Stasis as the most pathetic of the supercrook group I am building. I picture him as a middle-aged guy whose turn to supervillainy is probably part of a mid-life crisis. I assume I got that because he was an adult fighting teenaged Clark in that Superboy story.

After that, I look to his powers as an indicator of his personality. Would he be someone who holds people back when they want to change or improve their lives? Nah. I already have Toxus for that. Instead, let’s take a method that works with the mid-life crisis idea and say he is the one who wants to change his circumstances, but he’s unable. Oh, sweet irony. Probably, when he got into villainy, he paid his helmet with money borrowed from the Laugher. Now every unsuccessful heist digs him in deeper. And he probably has substance abuse problems too. He would sign up every time Toxus convinces him they will have a big score, but showy crimes never get him anything but trouble. And one can only make so much by freezing convenience store clerks and robbing cash registers while you know Superman is busy fighting the Galactic Golem uptown.