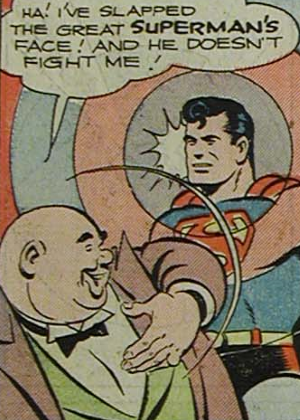 Obese Mobster In A Suit makes for a good comicbook villain. The reigning Obese Mobster In A Suit in comics these days is obviously the Kingpin of Crime in the Marvel Universe. I admit, he does the job well. But Superman had two such characters in the 40s making the Kingpin a latecomer. Today I am proposing that one of those two characters (but combining elements of both) should be brought back to the Superman franchise.

I’m not looking to fat-shame anybody or anything, being overweight can be a result of many things after all, but if a villain is openly greedy and self-serving, obesity can work as a signifier of that. It’s a fine line to run, but I’m saying that the villain(s) I am offering up today is not a bad person because he’s fat, but is fat because he’s a bad person. It isn’t true of all fat people, but it is true in this case. I think that, if we make that message clear in the stories, we could do this right.

Firstly, there is the Tycoon of Crime (also known as Mr. Blob). With only two appearances in mediocre stories about four decades apart, I can’t claim that he’s ever been important. I admit, if he was the only Obese Mobster In A Suit to work with, I’d not consider this worth the effort. But the other Obese Mobster In A Suit I want to bring back is from the radio, so I don’t have any actual images of him, and thus the existence of Mr. Blob is useful for my purposes. The villain I want to bring back is the Laugher. 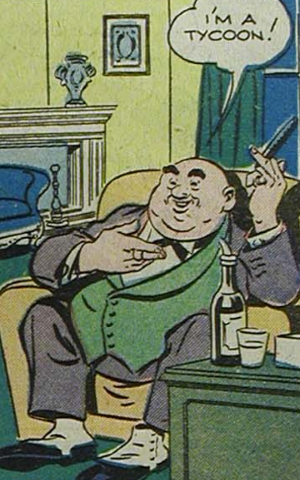 The Laugher appeared in multiple stories in the 40s, including being one of the villains to try to buy kryptonite from the Scarlet Widow. In those episodes he was described as being even fatter than the Tycoon of Crime is shown (the Laugher has “three chins and a belly large enough for six men”) and wears fancy suits and covers himself in jewelry. He is called “the Laugher” not because he cackles maniacally like the Joker, but because of his habit of chuckling whenever he finds something amusing. Think Dr. Hibbert, except he’s amused by crime. Given the chance, I’d cast the Laugher in the role of a capo working for the Widow and I’d say he financed the early criminal careers of criminals who amused him, such as the Toyman and the Prankster. Thus he’d be tied to the other parts of the franchise and I could have Lois and Clark bring down the Laugher as a bit of a victory step on their way to bringing down the Widow. And I’d definitely keep the Tycoon’s whole deal as a corrupt businessman. It just fits.