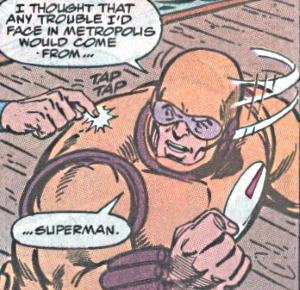 Timebomb is not on anyone’s list of top ten Superman villains. Nor on anyone’s top hundred, probably. Mostly, I don’t think anybody remembers this guy exists. His appearances between two comics in the 90s, both of which were about him being trounced and arrested, add up to about five pages. But there’s just enough there that I think he could be spun into something more.

Now, who is Timebomb? He’s a supervillain with very little known motivation. His powers are exactly those of Marvel’s villain Nitro. He can explode himself (or parts of his self) and then reform himself. 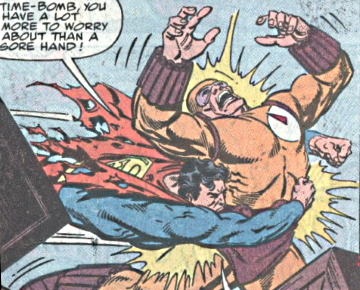 I’ve said it before, but I think we need to grow a rotating cast of minor villains who can be used to populate Metropolis’s criminal underworld. Timebomb is pretty perfect for that. He is exactly the type who can be seen in crowd scenes in prison or who can be hired by some mastermind criminal to serve as muscle.

But can such a nonentity as he be given a personality? I think so. Working with the theme of being a “time bomb” I’d make him a guy with anger problems. That’s a trait that could be used in a serious story, but can also be easily condensed for use in short comedic appearances. And the very typical villain desire to prove how tough he is suggests a guy who values violence as a masculine trait. There’s something to contrast against Superman himself.

If I continue my letter grading that I’ve done for previous villains, I think we need to bring Timebomb up to the C-list of Superman villains.