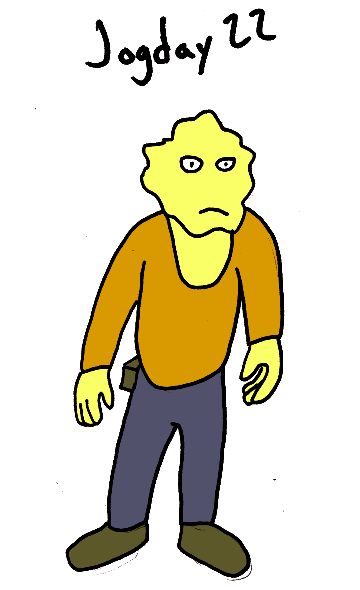 A largely humanoid species that evolved in a planet in a distant galaxy, the Zunkpork has developed technology capable of backing up their memories into computers, then growing new cloned bodies to house those memories when one of them dies. The clones are not considered to be the original person reborn, but is seen as a new person with the same memories. Numbers are assigned to the names of the new clones to designate how far down the line they are. No natural reproduction continues for the species any longer.

The Zunkpork have also spread into space and explored their galaxy, conquering some smaller species and forcing them to live under the rule of the Zunkpork Empire. The Zunkpork Empire was glimpsed in one Space Army comic, and then again when Little Choy insulted one of them, as is his wont.

Jogday 22 works in the Zunkpork Empire’s communications department. With an Empire that spans many planets, it is important to keep contact if the Emperor’s rules are going to be followed. Jogday simply does not care. Jogday will neglect to send important messages, will make up messages that were never sent, and in one case even posed as the Emperor and had Zunkpork forces evacuate a colonized planet just so they would stop sending messages. If anyone ever found out about any of this, Jogday would be punished. Luckily, nobody who investigates the problems ever seems to get the results of their inquiries.

Coquine 7, as can be judged by the single-digit number, is a survivor. Only six Coquines have died since the backup technology was invented, and every one has lived a fulfilling life. While not a bad person, Coquine has let this inflate their ego a bit, and does boast about survival skills and longevity to others. Ironically, this has led more than one person to daydream about killing Coquine just to prove a point, though luckily none have let this gone beyond fantasy. So far, anyway… 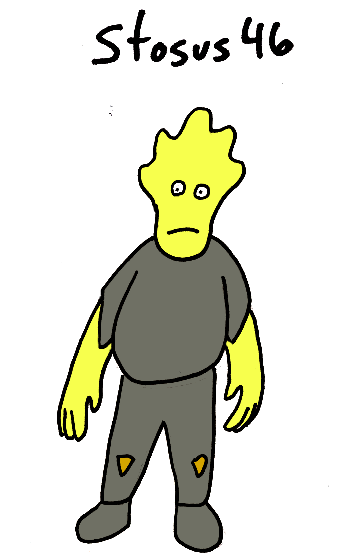 Stosus 46 lives in the shadow of predecessor Stosus 45. 45 was a criminal, executed for their crimes, but because of the rules of Zunkpork society, that did not prevent a clone from being made. Though 46 is considered another, different individual, all of 45’s memories are still in there. 46 definitely remembers the thrill of living as a criminal, but does not actually want to repeat the mistakes. But still, others look at Stosus and remember the last one they encountered, who was not quite as nice, and treat Stosus accordingly. With acquaintances like these, it isn’t easy to keep on the right track.

A Fact About the Zunkpork: Though they may look spongy or flabby, Zunkpork’s skin is actually hard like crystal and quite cool to the touch. If shattered, their skin takes a very long time to heal.