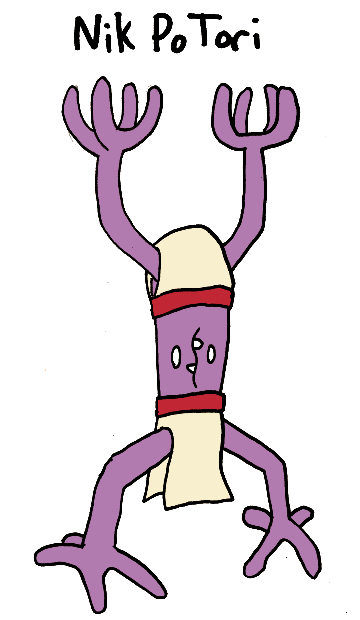 The planet Bo Dovi Exxus is home to a species that call themselves the Doviderans. These people have evolved to live in an environment of dense plant-life that we would liken to a thorn bush. Doviderans have four limbs, all of which can be used for locomotion or for manipulation. They are also have a vertical symmetricity that allows them to change their orientation while climbing without ever being “upside down.”

In their youth, every Dovideran is given a pet, a creature called a Mome Doriinty that resembles a cross between a pig and a squirrel. The young Dovideran is meant to care for this pet and thus learn all they need to know about life. Nik Po Tori learned early about death. When his pet died, Nik Po became shamed. Even though the death was no fault of his own, the superstitions of the world have people convinced that one whose Mome Doriinty dies will never be able to adjust to the pressures of life. In spite of this stigma, and motivated by the death of the beloved animal, Nik Po has dedicated his life to preventing death where possible. Fighting against the opinions of others, Nik Po has studied the medical arts and is trying to become the worlds most proficient designer of new and useful medical techniques. 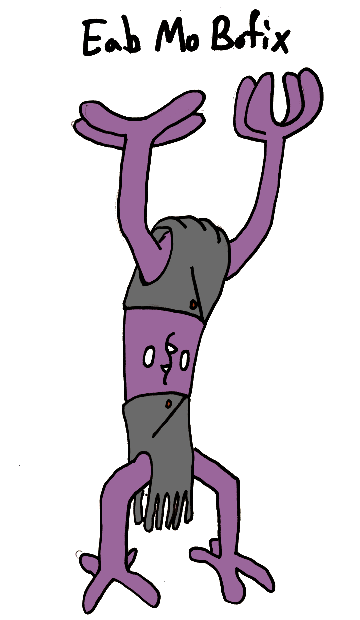 Eab Mo Bofix is a judge. It is his job to investigate crimes, locate the criminals, and dole out judgement. With a team of about a dozen assistants, Eab Mo holds his offices in one of the largest populated areas in the northern hemisphere. During his career, he has solved robberies, caught murderers, and exposed swindlers. He has recently been on the trail of a serial arsonist, and he is going to be disappointed to learn that the culprit is, in fact, one of his own assistants.

In spite of their ease at climbing, most Doviderans make their homes on the ground in dug-out holes covered with slabs of stone. Maug Ep Arb is an exception, living in a hanging structure high above a river. Maug Ep works as a water desalination plant, an esteemed occupation on this world, and has been so successful that her certain eccentricities have been accepted. Still, people talk behind her back about how crazy she is, though Maug Ep likes being thought of as a “weirdo” and cultivates the image. 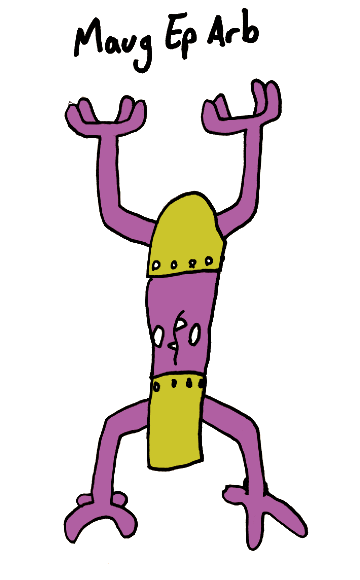 A Fact About Doviderans: The spoken language of the Doviderans is extremely complex and spoken very quickly. As a result, the part of their brain that deals with aural language is extremely advanced. They can concoct codes and ciphers nearly on a whim, and many play code games as a pastime. Poetry is another popular entertainment for them. All the languages that arose on the world in the olden days have now blended together into a single tongue that contains all of them. For Doviderans, picking up other languages is extremely easy. Though they have not yet ventured off their homeworld, they have detected life on other planets and begun communicating with them. They have also developed extreme xenophobic hatred of a couple of species they have learned have no spoken language at all. Again, it’s a good thing they haven’t left the planet.