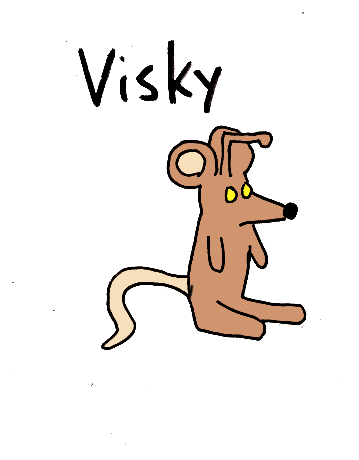 Grats are a small rodent-like species with a single antenna on their foreheads. They possess a number of senses not relateable to the human experience and are deceptively intelligent. They have a homeworld somewhere, but since the advent of space travel, they have spread to millions of worlds and forgotten their place of origin, with no regrets. Grats adapt to other languages with ease, and have adapted for life alongside various other species. Essentially, once you’ve entered into the greater pan-galactic community, you’re going to have Grats on your planet.

No members of the Space Army cast were Grats, but I drew them in the background of a couple scenes, especially when I wanted to convey a seedy atmosphere. (I drew a lot of pictures of Bars Full Of Aliens as a kid.) 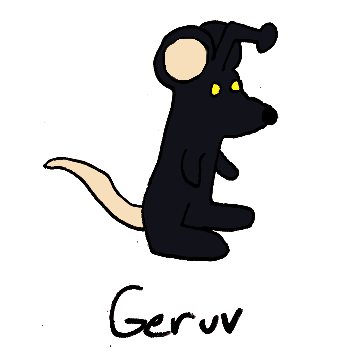 Visky lives on a space station that was once an important strategic location during the war against the Flartians, but is now a rarely used backwater location primarily used by intergalactic criminals. Though Grats are known to be involved with many illegal activities in the galaxy, Visky actually works alongside the station’s law enforcement, spying on smugglers informing on them.

Geruv, meanwhile, is actively involved in criminal enterprises. Living on planet important to the Space Government, Geruv is employed by crooked politicians as a spy, picking up bits of information used in blackmailing. Geruv plays all the sides against each other and is only loyal to those who pay the best. 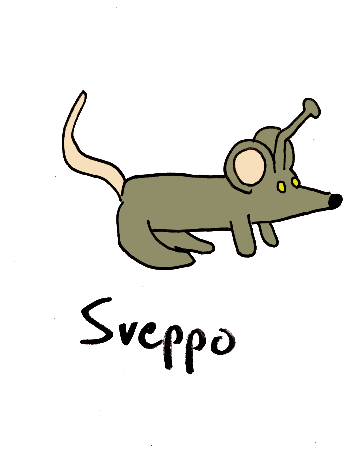 Sveppo is a rarity, the captain of a spaceship. It’s a single-person spaceship designed for a different diminutive species, but Sveppo has learned to use it and is now free to wander wherever the winds of interest blow. This level of freedom is not common among Grats, nor is it commonly desired by them.

A Fact About Grats: There are species that consider Grats to be vermin and will quarantine spaceships that contain them. Once a planet makes this an official policy, they attract the notice of the Grat League, a veritable army of Grats who use underhanded methods to punish those who have offended them. The Grat League are brutal murderers and will stop at nothing once their ire has been roused.