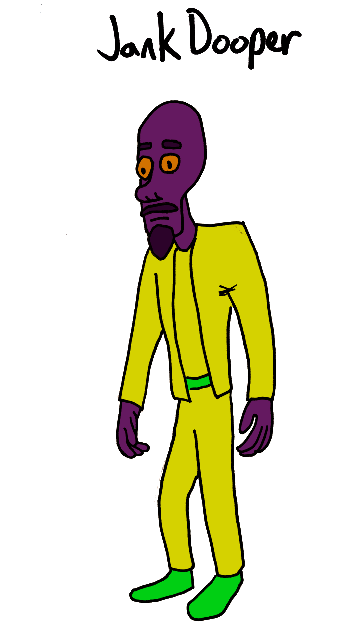 Planet Ortoba Boboba is home to the species known as Knlongads. They are a humanoid species with purple skin, yellow eyes, bald heads, and facial hair. They are also an extremely heavy species, though they look thin by human standards, they are so dense that they would be completely impervious to Earth weapons like swords, arrows, and even small caliber gunshots.

During the war that once ravaged the universe, Ortoba Boboba was captured by the Flartians and, while a resistance there struggled for freedom, the many Knlongads who were off-world joined the Space Army to fight against the occupiers. Since the end of the War, Knlongads have been working to rebuild their damaged homeworld while their government makes secret plans to attack what remains of the Flartians, even if it means ruining the tentative peace that has grown. 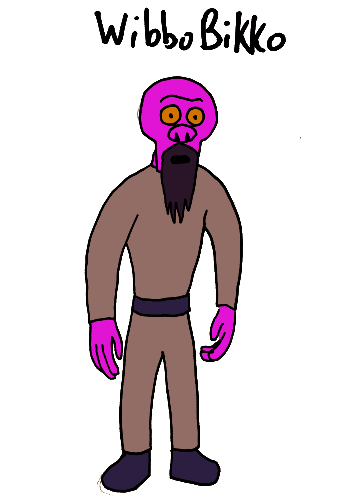 Jank Dooper is a pan-galactic celebrity, an artist and performer of great renown among many species. In the time since the war she has made a name for herself by producing works that highlight the terrors of warfare and the toll it takes on innocents, her ultimate artistic statement being that Peace Is Better. It may not seem profound, but it has grown popular in galaxies that had been so devastated.

Wibbo Bikko is a gruff and angry sort. It takes a long time for him to warm up to anyone and consider them a friend. During the war, Wibbo was not willing to join the resistance, because he didn’t know them and he figured they were probably all idiots, but he was also unwilling to settle down and obey the Flartian oppressors. Acting entirely on his own, Wibbo built a shack in the wilderness and lived there. Any time the Flartians tried to approach him, he met them with deadly force. Eventually they learned to let him alone, since it wasn’t worth the effort to conquer that one guy. Eventually the Flartians were repelled, but as far as Wibbo is concerned, he was the only Knlongad not to have been a loser in that war. 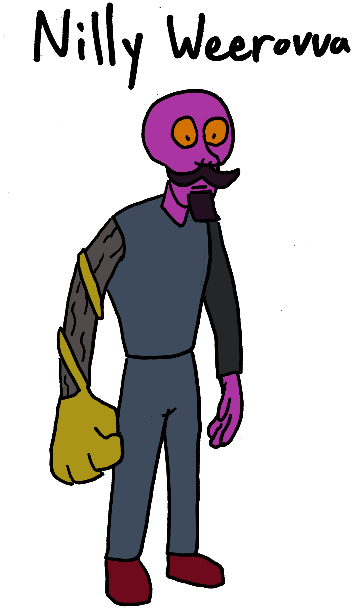 During the war, Nilly Weerovva was a resistance fighter on the homeworld. During an attempted bombing of a supply depot, she was caught in a blast and lost her arm. Her colleagues smuggled her off the planet to receive medical assistance she would not be able to get there. Taken to the planet Rustagale, the cyberdoctors there crafted a powerful replacement arm for Nilly, one that gives her strength beyond the norm for her species. By the time she’d recovered from the surgery and learned to use the new appendage, however, the war was over. Nilly returned home feeling that she had not done everything she could to help. While she is not aware of the government’s desire to strike back at the Flartians, she is part of a grassroots movement that desires the same thing: revenge.

A Fact About Knlongads: Knlongads sleep in a bath of mud that they prepare for that purpose every day.