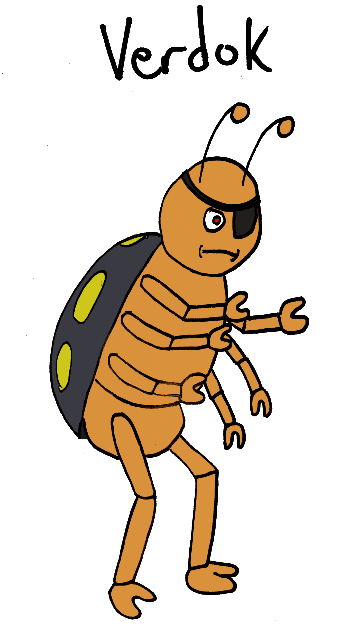 The Zurgbos are a species native to a world they call Zurgbotopia. They would probably meet our qualifications to be known as both Insectoids and as Reptilian, though the insect traits are more obvious to human eyes. They have eight limbs and wings (though they can’t fly after reaching adulthood) and two antennae that give them powers we would consider fantastic, such as telepathy, generating light, picking up radio waves, and remembering where they put small objects (pens and keys and cetera). Their primary means of communication comes as forms of dance, though they are capable of hearing and making aural speech (they can pick up languages pretty quickly thanks to that telepathy they have).

One of the Zurgbos, named Algo, is on the planet Earth acting as a member of the New Superhero Team. Most Zurgbos don’t like humans (I mean, why would they) and humans are so desperate to get Algo to fit in that they even make him wear clothes. Most Zurgbos wouldn’t put up with it, but Algo is either so good-hearted or so lacking self confidence that he grins and takes it. 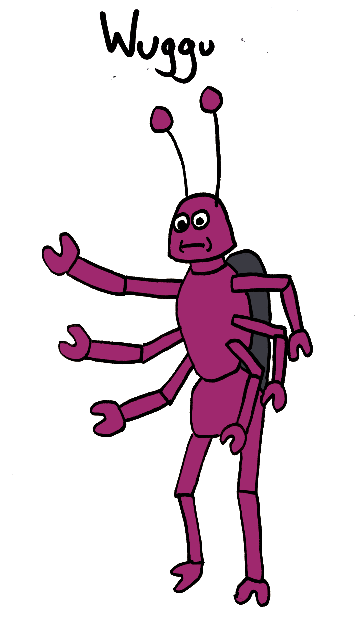 Verdok is a veteran of the wars against the Flartians, having served in the Space Army. Verdok was a ground troop, which was a hard job in a war against an enemy that has spaceships. Verdok’s squad, a unit called the Zonky Warguys, was the Space Army’s presence on planet Gurlopp during the infamous Battle of Gurlopp. When the Flartians tries to take Gurlopp, Verdok was just a young soldier, but he after seeing hundreds of his colleagues die, and taking the lives of dozens of enemy soldiers, Verdok felt very old and tired. But he lived, and his unit held the planet until reinforcements could arrive. And after all that, he returned home and lost his eye by using a can-opener incorrectly.

Wuggu is the originator of the phrase “You need to make a meal before you can throw it out the window” and is incredibly famous for it. That phrase, which Wuggu wisely patented, has become extremely famous all over the galaxy, now appearing in songs, poetry, and space movies. Every time it is used, Wuggu gets paid royalties. Hes so rich that he never needs to work again. 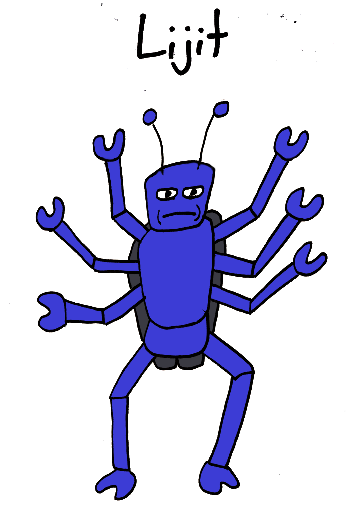 Lijit is a translator working at the Zurgbo Embassy on Space Government Planet IX. His exeriences there have made him extremely racist against all kinds of alien species. He doesn’t like how they look different, or how they eat different things, or how their stupid voices sound all kinds of stupid ways. But Lijit is a professional, though, so he keeps all his hatred to himself, only muttering terrible things beneath his breath. His favorite color is one that humans can’t even see.

A Fact About Zurgbos: Zurgbos hibernate for the cold season of their planet’s yearly cycle. Those living on other worlds may not need to hibernate if they aren’t somewhere cold, but there seem to be health issues that arise from not doing so. Also, exposure to cold can make them sleepy.