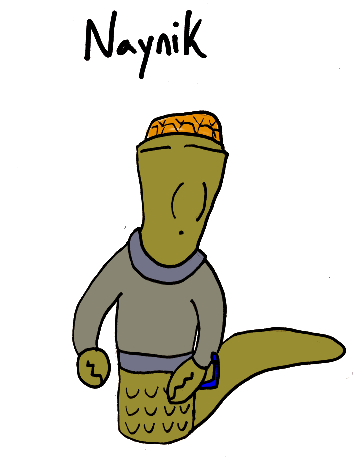 Planet Horhut is, to put it mildly, not a great place. It is ruled by a dense bureaucracy that has no concern for the ecological well-being of the planet’s biosphere. The pollution is terrible and life for the lower tiers of the societal hierarchy is a maddening trial.

Rather than slithering like a snake, Horhutans move by flexing their scales in a wave pattern that conveys them along. When not moving, they position themselves in an upright manner that lets them stand about as tall as humans. They have a large sense organ on the top of their heads, which is based on seeing magnetic waves. They have two arms that have claws that they can lock onto whatever they are holding. 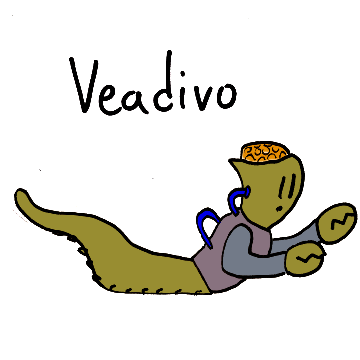 Little Choy once insulted a Horhutan.

Naynik is a Horhutans of a reasonably high social tier, not super rich, but also not forced to dwell in squalor the way most of the populace is. Still, it isn’t a great life. There are so many rules that one must follow or lose face that Naynik is constantly stressed out and worried about making a misstep.

Veadivo is employed at an information office, inputting data incessantly into the government’s databases. As is desired by the government, this job has destroyed any traces of interesting personality in Veadivo and co-workers. 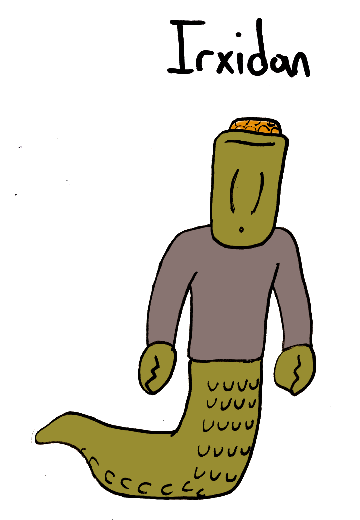 Irxadan dreams of a better world. Why must we toil endlessly in meaningless tasks? As far as Irxadan can tell, the only reason it is done is to tire the Horhutans and prevent them from meaningful tasks. Irxadan would love for this to change, but can’t think of any way to change it, and anyway, is too busy working in a factory that makes whips that rich Horhutans can use to hurt poor ones.

A Fact About Horhutans: There was a time when Horhutans created space probes with the intention to explore their galaxy. After doing that for a while, they got bored of it. The government did not find anything interesting quickly enough to justify spending resources, so they not only cancelled the program but went so far as to remove evidence that it had ever existed, because they didn’t want to admit that they’d made a mistake. The probes they made were actually very well designed, however, and may still be out there collecting information that nobody on Horhut is going to gather.