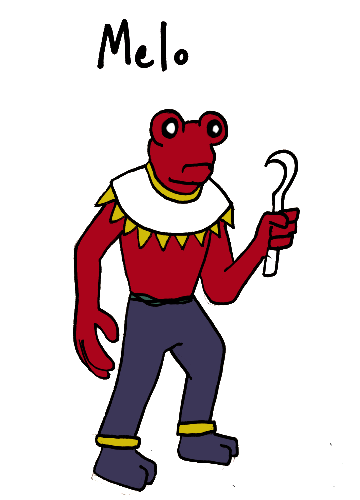 The Ormidians are a humanoid species, they’ve got the whole two-legs-two-arms-one-head thing going on. They are about the same height as humans, and their society is structured somewhat similar to humanity’s as well, with cities and nations and governments and all of that stuff. Their planet is called Ormidia and, though they have not yet left the world or discovered life on other planets, they have been visited in secret by the Space Gods of this universe.

Melo is a city guard, essentially the police force of the city. Unfortunately, Melo is something of a corrupt cop. Melo routinely takes bribes from the criminal element, and also picks on innocent people if Melo has a reason to do so. 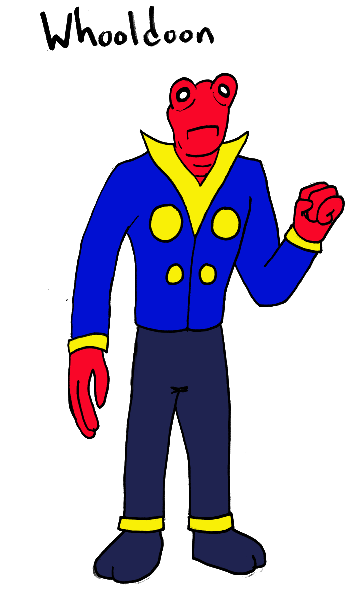 Whooldoon is a demi-god. Ormidians do not reproduce in the same way that humans do, with two partners coming together to form a new human, but instead they expel little globules we can call eggs and they are put into a big pile with eggs from all the others who are reproducing at that time. Mostly, the resulting offspring are clones of the egg donor, but they take genetic elements from the others in the pile, so some variations do occur. When Whooldoon’s parent was trapped in a burnt-out wasteland after a war, they laid an egg alone that would have died, but the Space God Valia took pity on them and kept the egg alive. The resultant child, Whooldoon, took elements of the god’s power and is now a tall, somewhat glowing, demi-god who is trying to find a place in the world. (Whooldoon’s “half-sister” of sorts would be Nicole Archibald.) With superhuman (or “superormidian” rather) strength and stature, Whooldoon is capable of doing much good and opposing all sorts of evil, but does that make Whooldoon brave? As a child of the God of Courage, even if they don’t know it, Whooldoon feels that strength is an important virtue, but can’t be sure if it is one they possess. 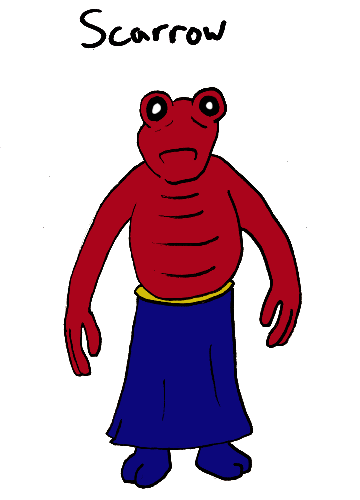 Scarrow is a priest for one of the most common religions on Ormidia, one based around the prophecies of a doom-speaker thousands of years ago. The prophecies insist that the end of time is upon us and we will all be dead within a generation. It has said that for thousands of generations now, and it isn’t any truer now than it was then. The adherents of the religion surely must have some doubts by now, but they plug along with their traditions as if the end was right around the corner.

A Fact About Ormidians: Rail vehicles, somewhat like trains, are the most popular form of transport on Ormidia. Between cities and even over oceans, the railways are built, and almost any one city in the world can now be reached by rail from anywhere else.