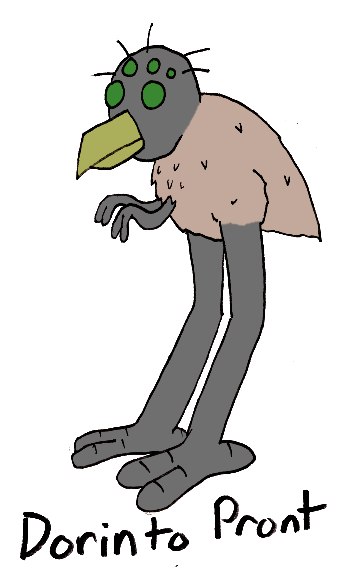 The Eebaks are a species with two powerful legs, six eyes, beaks, and soft fur that covers the core area of their body. They are an extremely social species, living closely together in “Houses” made up of individuals who will stick together throughout their lives, for better or for worse, with everyone supposed to pitch in.

Dorinto Pront is, as the name suggests, a Pront. Pronts are members of the “House of Houses”, which is a group of representatives from different Houses who meet regularly to discuss matters of the public good, and Dorinto does a lot of good there. Unfortunately. Dorinto’s House is particularly well off, with very little suffering in their lives, so the others don’t quite understand why Dorinto should spend so much time meeting to discuss the well-being of lesser Houses. Most of Dorinto’s housemates actually see it as a waste of time, and think of Dorinto as lazy and not contributing to the well-being of the House. 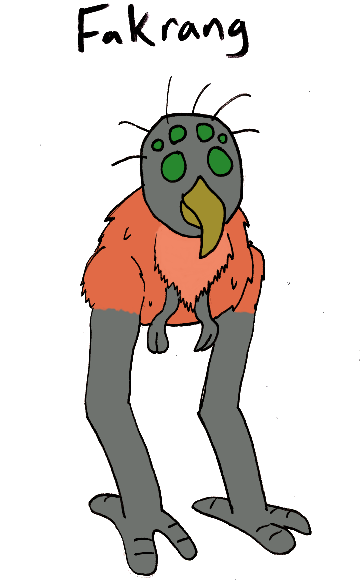 Fakrang is a professional mater. Eebak reproduction is done with two participants, one creating a shell-like object and the other filling it with genetic material and the burying the result in the ground (they are an agendered species and any individual can contribute either component). Fakrang, being a particularly attractive Eebak, travels from location to location finding those who have a desire to mate and helping them out. Eebaks don’t care for their offspring, so there is not much of an emotional component to Fakrang knowing that they’ve fathered hundreds of children.

Maureraw is a hunter. The Eebak diet consists mostly of smaller animals, which they prefer to eat alive, so hunters like Maureraw are expected to capture the animals alive and then bring them back to their House, or to trade them to other Houses. As a side-project, though, Maureraw has invented a method of working with a flying-insect-like species to gather the products they produce. Maureraw has invented this planet’s version of beekeeping. 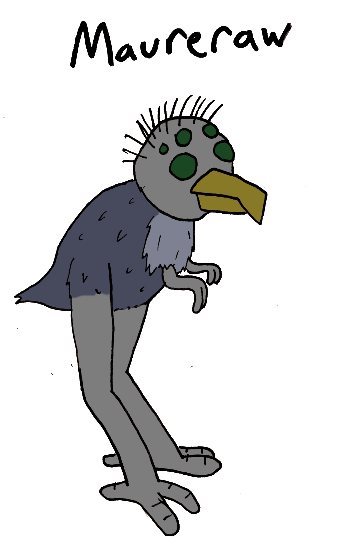 A Fact About Eebaks: Only a generation ago, the largest episode of warfare in the planet’s history erupted across the planet, caused by a matter of etiquette. Wars had happened among the Eebak before over things such as territory or resources, but this first World War began when a well-respected Pront in a highly civilized region travelled to a less developed region and was taken in by locals and given shelter and food. The Pront returned home and had a message of thanks sent, but it was discovered that the message was worded not by the Pront themselves, but by an assistant. This was seen as a scandal and an insult to the poorer region, and when the other poorer regions joined them in standing up against this affront, thousands of regions were drawn into the conflict to show the reality of their thanks to their allies. This was the cause of the bloodiest war the Eebaks have ever known.