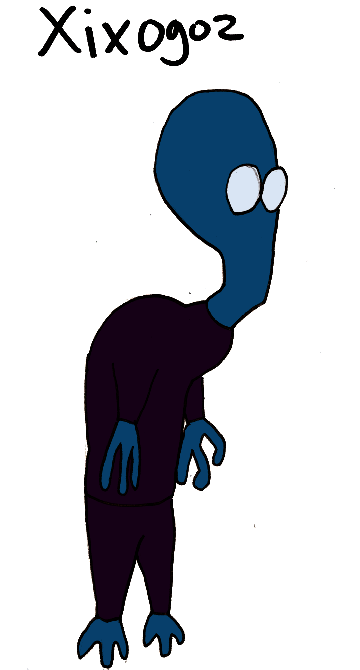 In Universe Silver, all mortals are playthings caught in the whims of the Space Gods we call the Astrolympians. Most mortals are lucky enough to not know that, but on one planet there is a species that has developed a sense that allows them to interpret the divine. They can detect the movements of the Space Gods and that has left them fully aware of how small they are in comparison.

They call themselves the Muchsufferers. They are an aquatic race, though roughly humanoid in shape, with big heads and three digits on each limb. Their form of propulsion involves shifting various internal organs around as ballast.

Xixogoz wants to rise to the level of the gods. Since the Muchsufferers can actually see that level of existence, it makes sense that one would think it was attainable. Though none has ever ascended to a state above mortality, there are tales of old days when an individual’s hubris would make the gods take notice of them. That sounds like a good starting point for Xixogoz, who is striving with plans involving the planet’s most advanced science, solely as a challenge to the gods, with the intent of trying to study, or even capture one when they manifest. 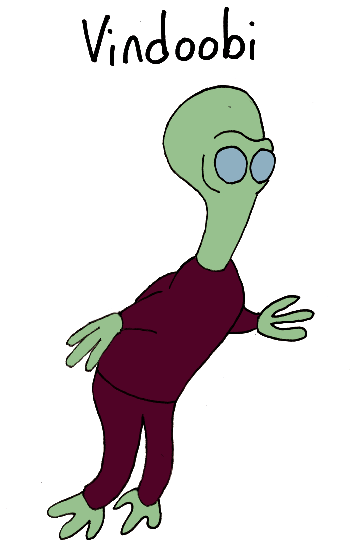 Vindoobi wants nothing more than to serve the gods. Unlike the religions of Earth, the Muchsufferers have concrete evidence that there are spiritual entities that control the mechanisms of the universe. In a lot of ways, it would be foolish not to want to serve them. Vindoobi starts every day consulting the oracles, asking for some indication of what the gods want, and then spends the day trying to do their will. Some of the gods have actually taken notice of Vindoobi’s actions, and are totally messing with him. They’ll tell the oracles that they a hole must be dug in the mud on the outskirts of town, and they’ll laugh as Vindoobi spends a day doing it. The next day, they tell the oracles the hole needs to be filled with different mud, and Vindoobi spends a whole day doing that, and they get to laugh again. Vindoobi would be devastated to learn this, but in the meantime at least feels useful. 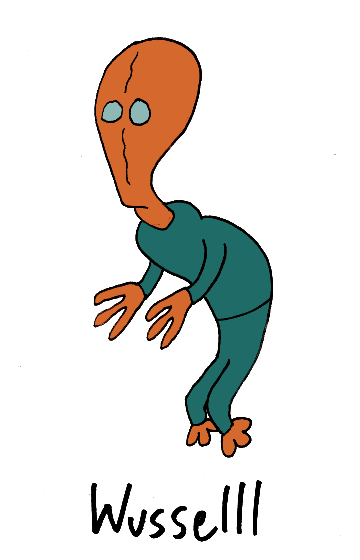 And then there’s Wusselll. Wusselll is one of the most gifted sculptors in the universe, capable of conveying emotion with an abstract hunk of rock. The gods pay attention to this mortal because they actually appreciate the beauty of the works, and several gods have rewarded Wusselll in order to entice the artist into creating works dedicated to them. Other Muchsufferers see how the gods favor their fellow, and they can grow jealous, which sometimes puts Wusselll in danger.

A Fact About the Muchsufferers: Muchsufferers have a mouth-organ on their chest that they keep covered by their clothing except when they are eating, which is an important ritual. Meals are taken at temples and large portions are sacrificed to the gods. Their diet consists largely of star-shaped vegetation that grows in bushes with sharp thorns that are gathered during a ceremony in which the Muchsufferers sing their prayers.