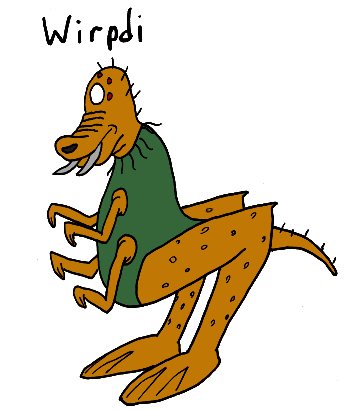 The Kymarks are a bipedal species with four forelimbs, tails, and tusks. They evolved on a planet they call Bruundac that orbits a binary star system. Bruundac is a planet largely covered in water and sandy shores. The Kymarks live in cities along these shores. They eat by digging with their tusks to root out worm-like creatures that make up most of their diet. The Kymarks have learned how to breed these worms in immense number, but unlike our farming they don’t keep the animals around. Their goal is to make sure there are plenty of animals in the wild, instead of in custody. 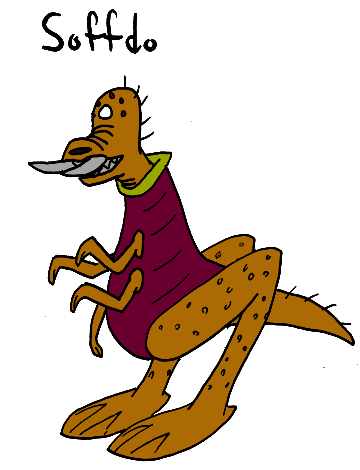 The clothing worn by Kymarks are meant to be permanent. They are designed with colors and designs relevant to family histories and presented to Kymarks at their adulthood ceremony, and are intended to be worn for life. But that makes it easier for Kymarks with something to run away from, such as Wirpdi, to slip away. It does require surgery to remove ones outfit, but to Wirpdi that’s an easy price to pay. Now wearing a counterfeit outfit and having run away to a city on the other side of the world where nobody knows that Wirpdi has been completely submerged underwater and then come back to the shore, a crime punishable by death (Ancient Kymark myths insist that anyone who has been completely submerged could easily have been replaced by an evil duplicate. Modern Kymarks don’t believe this, but the rule is still there.) 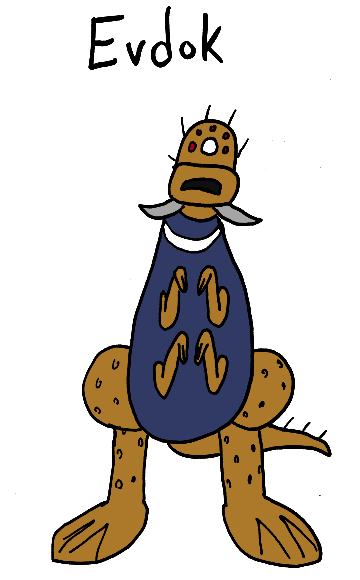 Soffdo is a corpse sniffer. That’s a job, not a hobby. It’s Soffdo’s job to smell around the city for any Kymarks who may have died unseen in some hidden corner (Kymarks sleep hidden under piles of cloth or other similar holes). When Soffdo finds a corpse, it is given a proper burial at sea. Soffdo’s lower right forearm is damaged. Damaged arms are unfortunately common for the species.

Evdok is an orator. In the system that the Kymarks have set up, the orator is not giving their own point, necessarily, but is hired by others to make a point. Evdok may believe that razing a forest to make room for more city is a bad thing, but will passionately argue the opposite if hired to do so. It isn’t considered hypocritical in this culture, because Evdok would not be pretending to actually believe it, the audience is aware of the way it works, but is instead simply a Kymark doing their job.

A Fact About Kymarks: Kymarks have six eyes, with one large center eye surrounded by five smaller eyes that each specialize in registering a different range of the light spectrum. If one of the smaller eyes is lost, through disease or injury, the overall vision can become colorblind to that eye’s specialty (if the large eye is lost, that’s just blindness no matter the health of the other eyes).