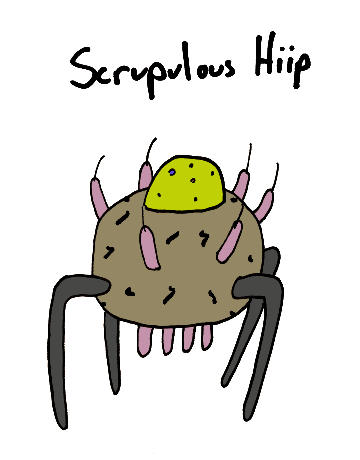 Over on planet Yeskobegg there is a species that call themselves the Nice Pals. They are quadrupeds, radially symmetrical, with a large sense organ on the top of their heads (their primary sense is not sight, but similar enough that we’ll call that organ an eye). Around the eye are six appendages that can protect the it, since there is no eyelid equivalent. There are also six appendages surrounding the bottom organs (including mouths, a nose, and retractable waste tube).

The Nice Pals believe in giving things positive names. They call themselves “Nice Pals” because they hope that will encourage them to exist in friendly terms with the rest of the universe. Offspring are given adjectives that the namers hope will encourage them to act well in life. While that makes some sense, as the names are meant to remind one how to act, it has also carried on to a more superstitious aspect. For example, there is a species of animal in Yeskobeggan oceans that they have named “Hopefully Won’t Eat Us”. 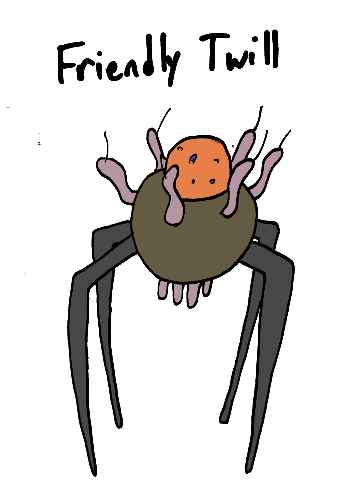 A significant percentage of the population of Nice Pals serve their communities as latherers. Scrupulous Hiip, one such latherer, spends the work cycle applying foam to the walls of Nice Pal structures, which both cleans and strengthens them. Scrupulous Hiip, like most other latherers, does the work because it is easy and does not require a lot of training, and there are so many latherers that they have one of the shortest work cycles on the planet. This allows for a longer pleasure cycle, and that’s what Hiip prefers.

Friendly Twill is a settler who has travelled to a remote region of Yeskobegg and is trying to establish civilization there. It has not been easy, the region is cold and rocky and Nice Pals have not yet developed seagoing vessels strong enough to reach its shores. But Twill toils hard, digging wells and building shelters in the hopes that others will come and help with the work, making it all worthwhile. 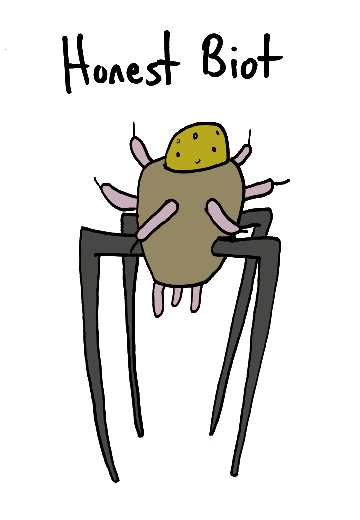 Honest Biot is an inveterate liar, but feels bad about it. The pressure of living up to one’s name is powerful, overwhelming even, and Honest Biot can’t take it. Life is hard. Lying makes it easier. None of that is Biot’s fault, why is it Biot’s problem. Just because of that stupid name assigned by a parent that didn’t even know Biot yet. How Biot hates the name, and that parent.

A Fact About Nice Pals: Though the Nice Pals do try very hard to be nice, theirs is still a society in which personal matters are occasionally solved by duels to the death. When a disagreement arises, one Nice Pal will challenge the other and the other must accept or lose the esteem of the rest of the community. Duel specifics vary across the planet, but most commonly the challenged party gets to choose the details.