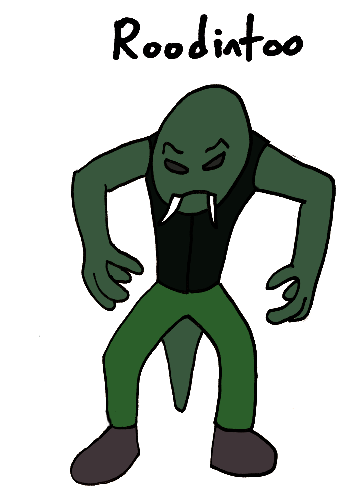 Ootmoos are a thick-skinned bipedal species who are a big part of the pan-galactic community. Ootmoos are active in almost all of the universe-spanning social organizations that have been formed over the ages, including the Space Army, the Space Trade Union, the Space Pollution Removal Force, the Space Alliance of Piano Repairers, and even the Space Social Organization Organizer Organization. Ootmoos are everywhere, working to make a better Space for everybody. They have no blood, they can breathe underwater, they shed their skin once a year, and they like collecting pictures of clouds. Every Ootmoo in existence likes collecting pictures of clouds.

The Space Army’s Pooloop was an Ootmoo. Since the end of the war, Pooloop has been living on the planet Zarnton, seeking inner peace. 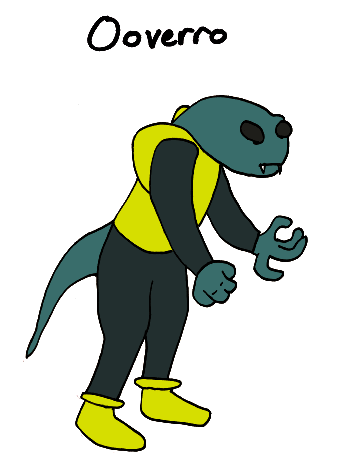 Roodintoo is a young Ootmoo, merely six skins old, who is working at a spaceship factory. Roodintoo has never known any work but this, and isn’t really unhappy, but kind of feels like something is missing. With that in mind, Roodintoo has begun assembling a personal spaceship in their spare time, with the intention of travelling the cosmos once it is finished.

Ooverro was a Space Army captain during the war with the Flartians. Ooverro’s ship saw a lot of combat, and Ooverro lost many good crew members. All the crew members knew the risks, and obviously the Flartians had to be stopped no matter the cost, but those deaths still weigh on Ooverro’s soul. To make sure that their sacrifice was worth it, Ooverro now dedicates time and resources to repairing and improving the homeworlds of those lost crew members. 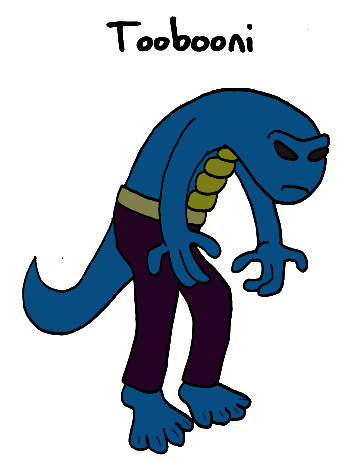 Toobooni still lives on the Ootmoo homeworld, which is called Voot, and has a very successful career as a singer. The Ootmoo languages, which would sound to our ears like a bunch of very fast hooting, is extremely complex and allows for advanced wordplay. Plus, every word has an “oo” sound, so rhyming is easy.

A Fact About Ootmoos: For a long time, the Ootmoos reproduced by laying their eggs inside the corpses of their enemies. When the species became a peaceful ally to other aliens, that was often frowned upon by others. Since then the Ootmoos have perfected compost mixtures that are actually more ideal for laying eggs than corpses ever were, which makes one wonder why they even did the corpse thing for so long. (The answer is because it freaked out their enemies, of course.)