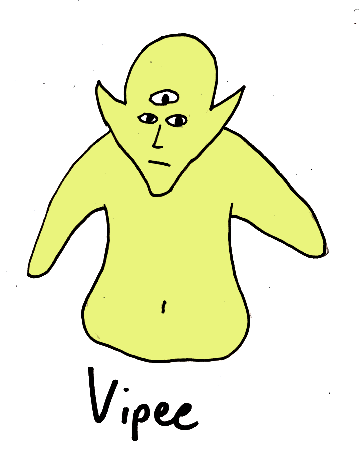 Blegbos are the dominant species on planet Whummmp. Theirs is a swampy world with shallow water all over the surface, and these blobby beings wallow there in relative peace. Overall, the Blegbos are an easygoing species, long-lived and mellow. Though Blegbos do feed on grassy plants of their world, they also intake a lot of energy by sprawling on rocks and lazily basking in sunlight. While doing this, they are also groomed by some of the small flying animals of their world, who pick insect and leech-like creatures off the Blegbos for their own meals. 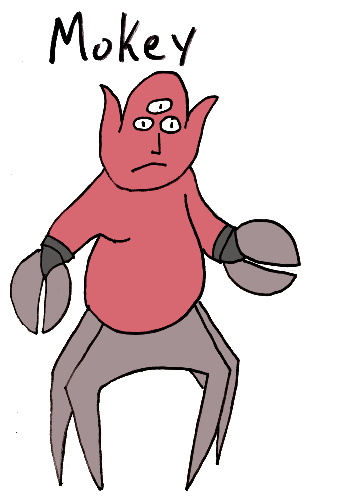 Vipee is a philosopher, one of the most common occupations on Whummmp. Vipee is really bad at it, though. Almost all of Vipee’s ideas are about lightning and how fast it is. We get it, Vipee. Lightning is fast.

Mokey, like all Blegbos who leave the homeworld, has cybernetic limbs that aid in mobility in other conditions. Blegbos need not attach their technology to their bodies surgically as they can “ooze” themselves into the limbs, filling the tiny crevices and making them natural extensions of their form. And when they don’t need them anymore, they can easily remove themselves by simply pulling out. Mokey’s spider-like legs allow mobility on the rocky, uneasy terrain of the world where Mokey is currently hiding from friends after losing a bet and owing them the equivalent of twenty bucks. 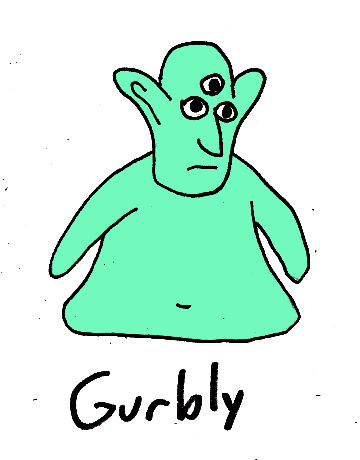 And Gurbly is a hunter. Though Blegbos are not carnivorous, they do still engage in hunting of certain species on their world for both resources (animals on this world have organs that can be used as tools such as water filters, air pumps, and even syringes) and esteem (successful hunters are rewarded with first choice of nesting grounds). Gurbly is a middling hunter, but enjoys the work.

A Fact About Blegbos: The Blegbos have invented more varieties of bucket than any other species in their galaxy by something like tenfold. They have kinds of buckets that human minds can’t yet imagine.