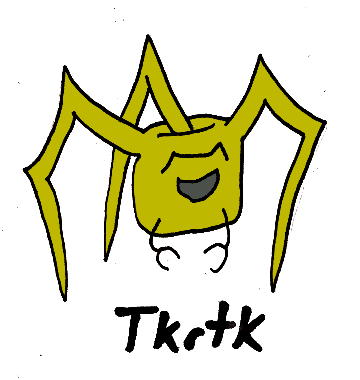 The Tkrkvts are a species that live on a moon of a gas giant planet they call Vvk. They have not yet realized the cosmological position of their moon world, but think of it as just the area “Under Vvk” so that is what we must call their world. There are many larger species Under Vvk that would potentially be predators of the Tkrkvts, were it not for the fact that the Tkrkvts have evolved to be extremely poisonous. It can still happen that a Tkrkvt will be eaten, so they absolutely do not think of themselves as the “top of the food chain” of their world, but the fact that predators will almost always die afterward gives them the impression that they are, in a way, being avenged by the universe, so they must be some kinda special. 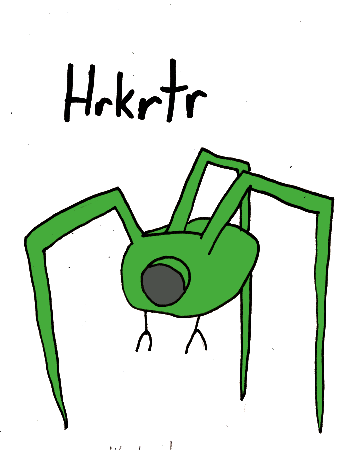 Tkrtk lives in the largest city-hill Under Vvk, amid a massive bustling population, and Tkrtk wouldn’t have it any other way. An active go-getter, Tkrtk is always seeking out new ways to help out the city-hill. A lot of the rest of the population thing Tkrtk is an idiot for that. (City-hills being, basically, hills that have been hollowed out and turned into cities, of course. They live in those.)

Hrkrtr has gone missing. Nobody Under Vvk is sure where Hrkrtr has gotten to. Ain’t nobody seen Hrkrtr in years. It’s weird. Of course, we know that Hrkrtr was abducted by aliens, but you can’t expect the Tkrkvts to know that. They haven’t even thought up the idea that there places other than Under Vvk. Anyway, Hrkrtr eventually made friends with the aliens and now travels with them. It’s fine. 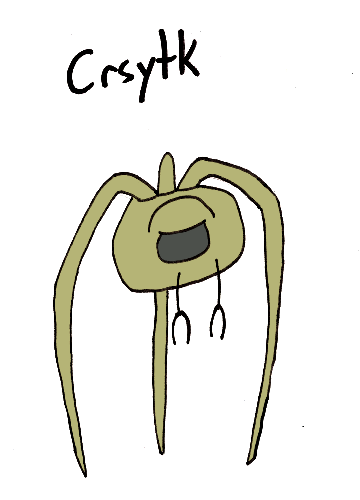 Crsytk is a nomadic plumber. The vast pipe system of the Tkrkvts is probably their most advanced technology, so the plumbers are well respected, but few in number. Crsytk and fellow plumbers will often travel vast distances to whichever part of the world they are needed. They’ll be honored guests in the home of those they are helping, and their coming will be big news in the area around. It’s all very nice, but Crsytk has an ulterior motive for travelling, Crsytk is trying to locate the Tkrkvts who killed a plumber years ago, and who got away with it. Crsytk will get revenge even if it takes the rest of time.

A Fact About Tkrkvts: Though the Tkrkvts have a vocal language (one which incorporates noises made by scratching at the ground), they also possess the ability to mark things with a pheromone-like system. Because of this, no form of written language has ever been produced. Instead, they have worked to develop methods of saving pheromone-information by applying it to materials that will sustain it for generations.