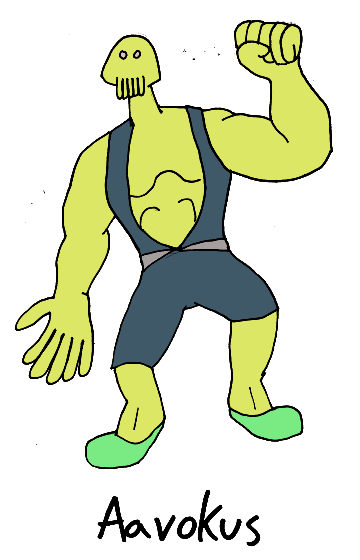 The planet Jinnar is in bad shape. Long ago the world was a paradise of high-tech cities, but centuries ago as we reckon time, a group of self-proclaimed “wizards” made contact with mystical intelligences that exist beyond the universe. In exchange for worship, these beings granted magical power to the Jinnarri wizards, and those wizards used that power to try to take over their world. An epic war ensued and, though the wizards were stopped, most of Jinnarri society was reduced to rubble. The few survivors had to eke out a life in the ruins, and slowly they have pulled back together to form new villages and try to pick up the pieces.

Konwaag the Magic Hunter is a Jinnarri, though he has left the homeworld behind on a quest to wipe out magic throughout the galaxy. He says he’s doing it because magic is evil, but it sure is a convenient excuse to get away from this hellscape. 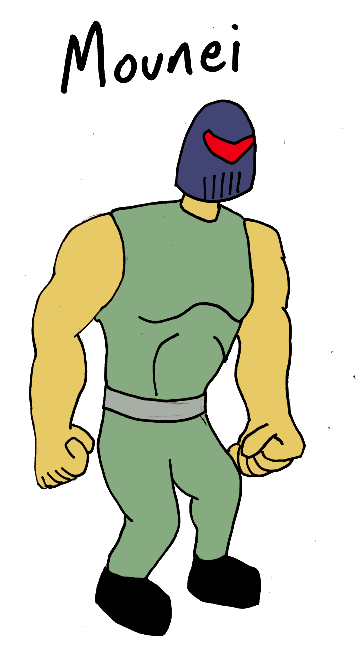 Aavokus is a pretty standard example of a Jinnarri civilian. Just a child during the last days of the war, he was raised in a prisoner of war camp among other starving prisoners. When the final days of the wizards came, those who could get out of the camp did so, only to find starvation waiting again in their freedom. In those days there were mystical monsters, slaves to the wizards, that wandered the ruins attacking Jinnarri. It was a constant struggle for survival, and Aavokus lost many friends along the way. But eventually the monsters were wiped out, and the Jinnarri who remained were able to band together. Aavokus was one of the founders of a village, and is now one of the elders there.

Like Konwaag, Mounei has managed to get his hands on some sweet wartime anti-magic technology. He only has a helmet, but it is complete with working sensors and display screens, so it is a formidable tool in this world of scavengers and survivors. Unlike Aavokus, Mounei and his pack of fellow survivors have not yet settled down, instead living a nomadic lifestyle guided by the information given by the helmet. 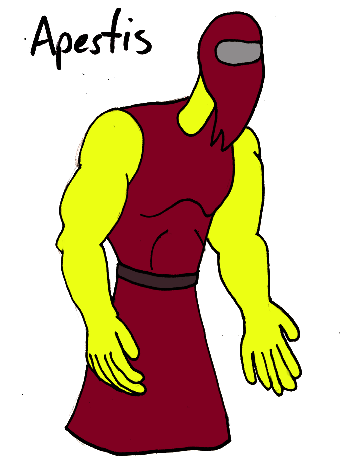 Apestis is part of a cult that seeks to retrace the steps of the Jinnarri wizards who once tried to conquer the world. Facing a terrible life of suffering and turmoil, it is only natural that they would try to find mystical short cuts to bring themselves succor. But the simple truth is that they are not magical. They do not have access to the otherworldly energies that the old wizards used to warp reality, so the cult are merely a superstitious batch clinging to traditions and rituals they don’t understand that accomplish nothing. Worst of all is the fruitless blood sacrifices they make to beings that just aren’t paying attention.

A Fact About the Jinnarri: The digestive system of the Jinnarri is such that they eat small pebbles to help their stomachs break down their food, which is mostly made up of grassy vegetation swallowed whole.