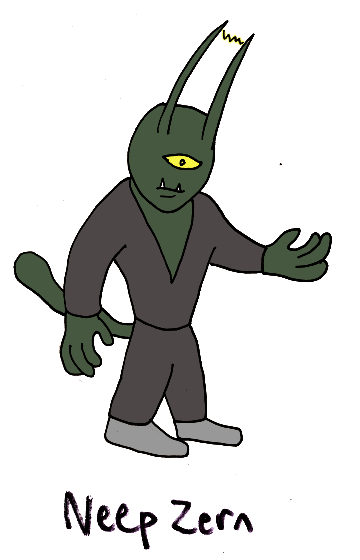 The Drutag are an aggressive warrior race who believe proving oneself by the domination of others. But they are not the stereotypically angry warrior race who revel in pointless violence. They are actually considered to be cold and emotionless by most outsiders, for among the Drutag there is a lot of tradition, ritual, and bureaucracy that determines one’s social standing. It just happens to involve a lot more physical combat than usual.

Standing about a foot shorter than a human on average, the Drutag have a single eye and a set of head-prongs. Though the prongs are technically sensory organs, used to detect magnetic fields and such, they can also emit an electrical pulse that will do damage other species. This was used when the primitive Drutag hunted prey, and it is often used now on other species when the Drutag try to conquer them. 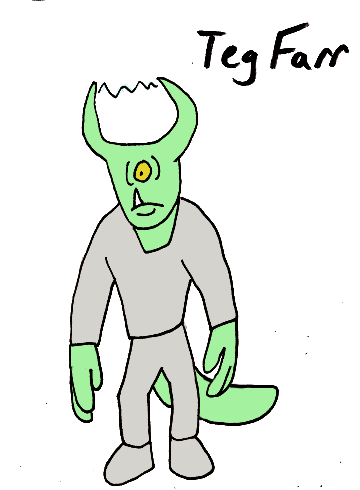 Neep Zern works in the Drutag Astronomical Offices. This is the planet’s foremost operation for charting out the cosmos, with a special focus on finding places to conquer. Neep is in charge of the telescoptery division, a job he got by challenging his predecessor to a duel to the death. By standing outside the building and performing a challenge dance, he declared his intentions, and his predecessor had the choice to either accept and fight, or to back down and lose the respect of her peers, and probably lose her job anyway. She chose to fight, but Neep defeated her. In general, it is actually pretty rare for a challenger to depose a high-ranking worker, but it does happen, and Neep is proof of that.

Teg Farr is part of the Drutag Imperial Expansion Army. He and thousands of soldiers like him are shipped to other worlds to make other species subservient to the Drutag. It is a career perfect for those physically strong enough to rise in society, but not smart enough to do so without being forced to risk their lives on other worlds. 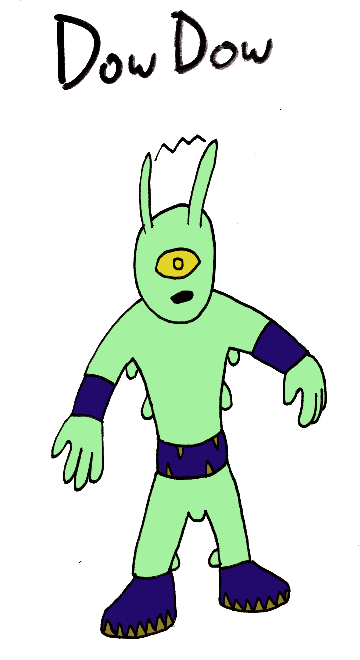 Dow Dow is a simple farmer in one of the smaller villages of the planet’s wettest regions. While the Drutag in more important parts of the world commandeer most of the good produced by the smaller farmers, the farmers do get to provide for themselves and thus have a freedom from the bureaucracy and military that most of the Drutag don’t have. Dow has been using her position as the strongest in the village to gather the loyalty of those beneath her, dreaming of one day overthrowing the big city governments, though she has no idea just how out of reach that dream actually is.

A Fact About the Drutag: In addition to proving oneself physical superior, a popular Drutag occupation is proving ones skills by being the first to do things. It’s for this reason that Drutag scout ships will often warp off to unknown planets and solar systems just for the claim of being pioneers. It’s actually made this warrior race one of the most successful groups of space explorers in their universe, having even visited galaxies beyond that from which they originate.