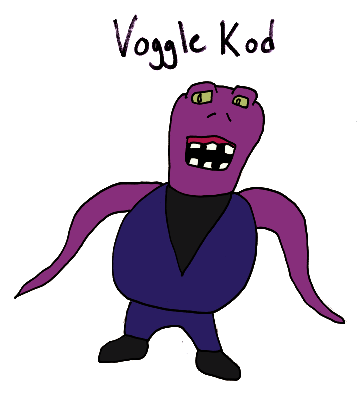 Planet Kodron is in Universe Silver, the universe with the Space Gods known on Earth as the Astrolympians. Those Space Gods, obviously, are not merely tied to Earth, but are representative of concepts all through the universe and their presence is noted even by the intelligent people of Kodron, called the Kod Kod. In fact, whereas on Earth these gods are considered mythical, the Kod Kod consider them to be scientific fact as concrete as the concepts they personify.

The Kod Kod are purple-skinned bipeds with two tentacles where humans have arms. They are taller than humans on average, but are spongy, which makes them much lighter and physically weaker. The planet is not very geologically active, having only one continent and few mountains. As a result, there is very little variation in Kod Kod culture overall. The Kod Kod are nocturnal and sleep outside in the daylight, their skin photosynthesizing light as they rest. 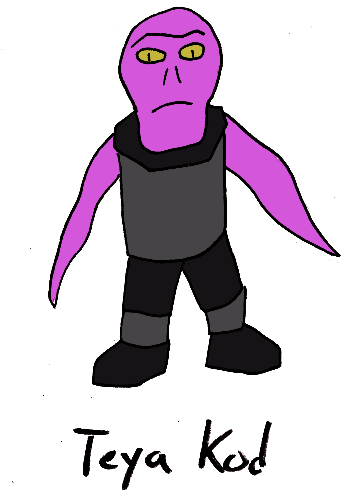 Living in a settlement along the Eastern Shores, Voggle Kod is a very average citizen of Kodron. He spends the days hunting for this world’s equivalent to fish, then selling any that aren’t needed to feed his family. This is the single most common occupation on the planet and is seen as good wholesome work. Voggle lives near a temple to the Space God of Hunting and makes sure to sacrifice at least one fish from every haul.

Teya Kod is a soldier in the Devnan Army, a force serving directly under the Space God of Discipline, who makes her home on this world. The God of Discipline likes planet Kodron because there are few actual wars that could make her army fall into chaos. As it is, soldiers like Teya are just people who like strict routines and rigorous self-improvement programs. They are much more likely to help out after storms cause damage than to get into combat. 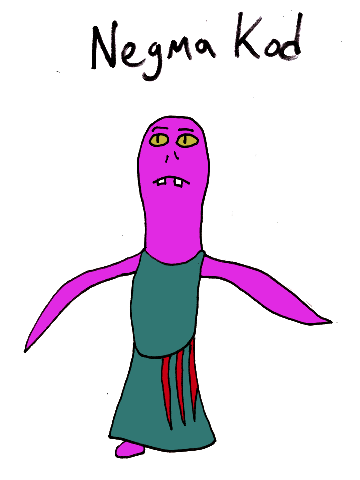 Negma Kod is a worshipper of Constelli, the Space God of Intelligence. Negma’s mission is to learn as much as possible, expanding her mind to allow Constelli’s consciousness to partner with hers. Others in this field of worship, who have successfully opened their minds to sufficient limits, now run the greatest scientific laboratory in this universe, which is especially good for a species that has not yet made contact with other worlds.

A Fact About the Kod Kod: A two-sexed, the Kod Kod are able to determine the sex of a gestating infant by regulating the temperatures to which the expectant parent is exposed. This method has allowed generations to be made up more prominently of one sex, often as a reaction to the previous generation being prominently the other.