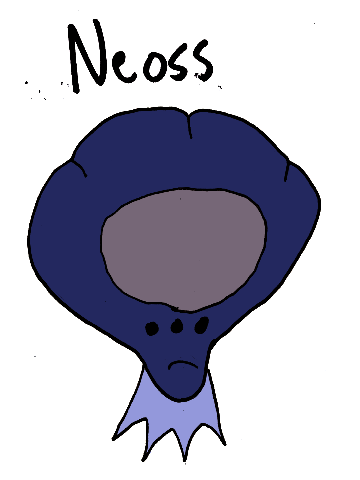 Note that members of this species does not call themselves “Floatrians” as they do not have a name for their kind. They have not yet fathomed the idea that there are other worlds with people they would have to differentiate themselves from. They have evolved in an upper stratosphere of a gas giant planet. They are hermaphroditic leathery-skinned sacs filled with gasses that allow them to float. The heaviest part of a Floatrian is the “plate” above their three eyes. Floatrians can control bloodflow into this plate, and in doing so make patterns in the heat there. With vision going into the infrared spectrum, the Floatrians can see the patterns in each other’s plates and this is how they communicate (vocal communication would be quite difficult in the winds of their world). While they can project gas from an orifice on their back to facilitate movement, Floatrians also have fins that allow them to control their gliding and that suffices most of the time. While they can control the four “prongs” of their fins just enough to delicately grasp very small, light objects, they lack the finesse to really work with them and, as such, have created very little in the way of technology. 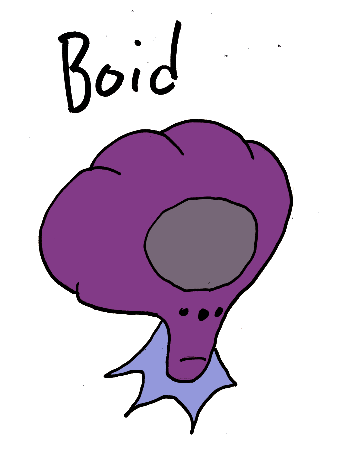 The primary diet of the Floatrians is made up of small creatures that, if they can be compared to Earth’s creatures, resemble a mix between plants and insects. Mostly, this means that the Floatrians are nomadic, following the insect swarms around as they seek out sunlight for photosynthesis. Neoss is a swarm claimer. It’s job is to stay as close to a swarm as possible, so that Neoss’s tribe may rightfully eat from it, while other tribes know to go find some other food source.

Boid, meanwhile, is a tribeless Floatrian. Having never formed the close connections to other individuals that would allow it a place in a tribe, Boid now travels far and wide with a valuable resource: information. Boid learns whatever bit of fact someone may find valuable (weather reports, news of tribes going to war, etc.) and, when coming across a tribe, will offer that information up for the right to feed at their swarm for a time before moving on. 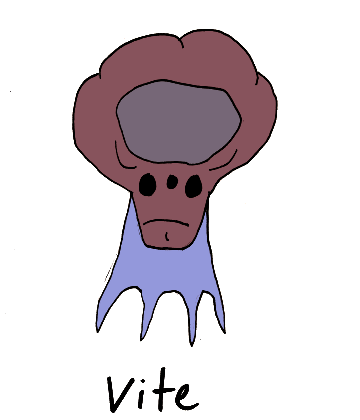 But Vite is less kind. Leader of a tribe that doesn’t have a swarm of their own, Vite seeks out swarm claimers from weaker tribes and moves in to steal meals. With violence if necessary.

A Fact About Floatrians: When they are young and small, the Floatrians float quite high in the skies. As they grow older and larger, they can’t quite achieve the same heights (and don’t really want to). And as they get very old and weak, they tend to stay even lower, until they eventually die and fall finally into the winds and are carried away. It is perhaps for this reason that they, as a culture, tend to associate the direction of “down” with higher ages and higher numbers in general. To them, the number 100 is a “lower” number than 10, even though it is still a “larger” number. Also, they use base-4, but that’s beside the point.