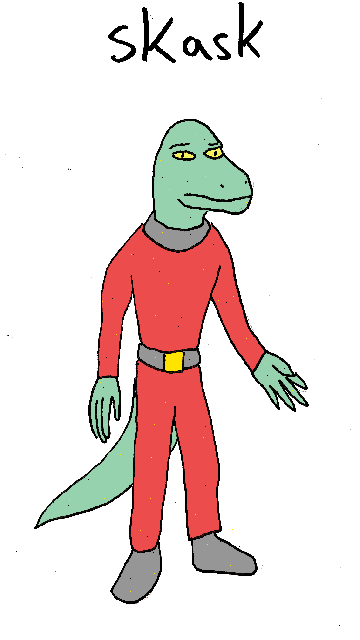 The underground kingdom of King Mederex tries for a medieval aesthetic, but they do have access to modern technology, especially the higher ups. The lizard people in the kingdom are rarely higher ups, but Skask was an exception, because his of his technological skills. Using his computer prowess, he helped to guide the forces of Mederex during the conflict now known as the Secret Factions War. But that war was not won by Mederex’s kingdom. When the Secret Government finally fought their way into the tunnels and Mederex himself prepared to surrender, several members of the king’s court took their own lives. None of that for Skask, though. Instead, he uploaded his consciousness into the powerful computer system he had spent years developing. When they found his body, they assumed he was dead, but he lives on as a sort of electro-ghost. With the right technology, he can project himself into the world as a hologram, but often he will remain hidden in the form of information. No longer loyal to the king he sees as a coward, Skask is out for his own desires. What those are, remains to be seen. 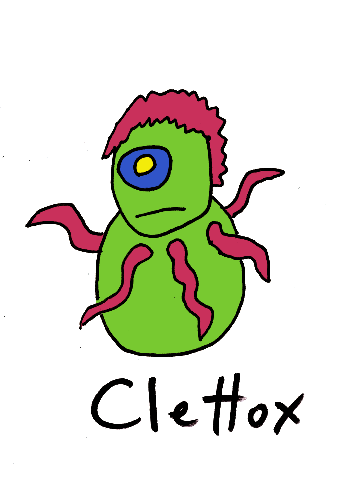 The demon Clettox was left trapped on the Earth after some wizard summoned it her via a ritual, but was disappointed with the tiny demon he caught. Since then, Clettox has lived in the oceans, usually submerged, resting near the bottom, but when it gets hungry it will bob up to the surface and hunt down a meal, generally a human being. Moving quickly by skimming along the surface, Clettox can chase down a powerboat and devour those within in a matter of minutes.

I basically doodled this guy on the corner of a page to fill up space. I had no idea what to do with it, so it just sat there. Months later I had a dream in which someone had created 3-D computer models of some of my characters, including this guy, and he was depicted skimming across a water surface. Dreams are good enough for me.