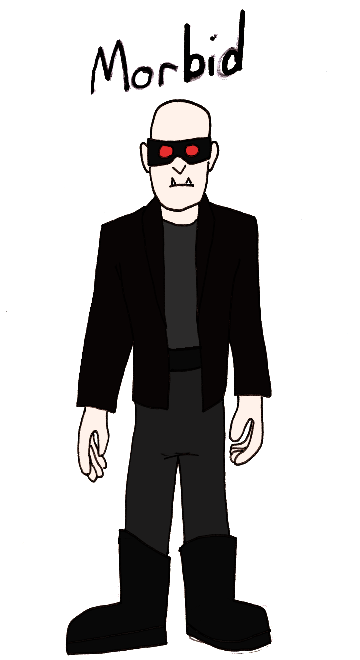 Morton Bidwell has a unique ability. He can transfer traits from any corpse he touches into another body. For example, if the corpse had knowledge of the location of a hidden treasure, Morton could touch the body, then touch another person and that person would know the location. He could transfer kung-fu, or he could transfer fingerprints, or if the body was superhuman, he could transfer super powers. With that last bit in mind, he has become Morbid, a supervillain who swoops in like a vulture when superheroes and villains die so that he can get their corpses.

The catch is, though, that Morton can’t transfer the traits into himself. He has to put them into someone else to get any use out of them. With that in mind, he has assembled an army of henchmen called the Nosferatroops. Mostly a group of criminals for hire, Morton tempts them in with promises of riches, but the first trait he transfers into them is blind loyalty taken from the corpse of his first Nosferatroop, who died to save his life. The result is a cadre of loyal superhuman soldiers.

I thought up the name Nosferatroop sometime in the early 2000s and then created a supervillain to lead them. There’s at least some inspiration here from a Captain America villain called Dead Ringer. 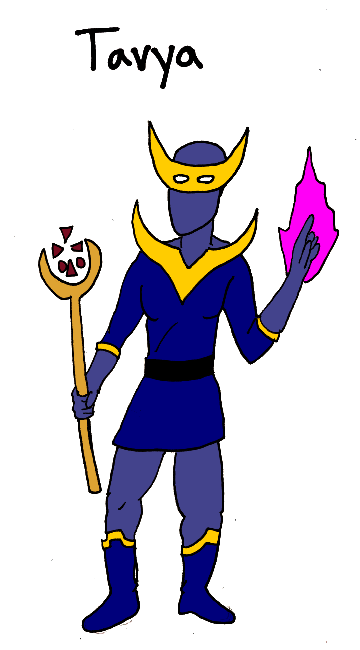 Tavya claims to be the exiled ruler of some mystical realm in another dimension. Her only goal in life is to get back home and she doesn’t care who she has to hurt to accomplish that goal. With the Wand of Wazoon she has access to all sorts of magical powers (which mostly amount to shooting energy blasts from her hands), but that isn’t enough to get her home. Unfortunately, most of her plans for returning home involve mystical rituals of human sacrifice or stealing vast quantities of precious metals or other crimes that Justice-Man has to stop. Honestly, he’s probably be willing to help her to find some less-evil way of returning to her home, but she refuses to accept his help.

Tavya is meant to evoke the kind of magicians that showed up in old Dr. Strange comics. Lots of alliteration and weird visuals would follow her around. Unlike all my other Justice-Man characters this month, she’s a fresh creation, rather than something from my notes. I just felt that there should be some new blood in here.

So that’s it for another month of Justice-Man characters. Next week, something else, I don’t know…