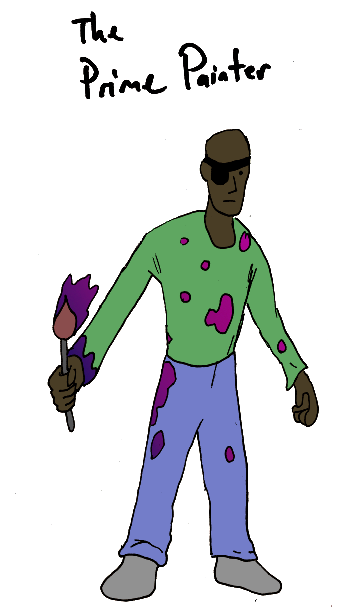 Though born as an ordinary human, called Jericho, the man now called the Prime Painter was favored by the Space-God of Creation known as Genitor. So impressed with Jericho’s devotion to creating works or art, Genitor decided to grant him with a mystical paintbrush that allows him to alter reality.

Always having hoped to improve the world with his art, Jericho began to use his new powers for the greater good. Though he originally tried to fight against poverty, disease, and world hunger, the Space God of Hopelessness caught wind of his actions and began to actively oppose him. Since then, Jericho has been publicly seen as a sort of superhero who has had to spend a large amount of his time reacting as the Monsters of Despair work to make the world look terrible. Jericho is saddened that his efforts are hampered by this “supervillain” nonsense, but what can he do but keep fighting? 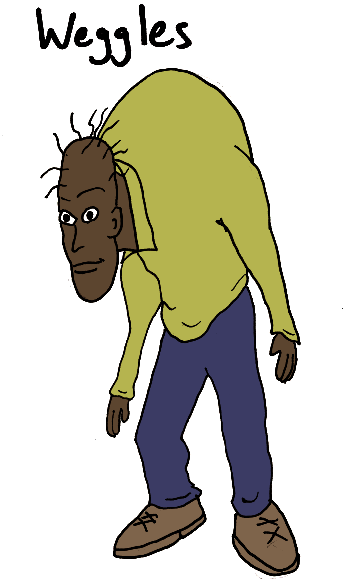 Weggles was born deformed in a harsh world during a great battle between good and evil forces. His parents were both killed in war within a week of his birth. The odds were very good that the infant Weggles would not survive long. The only reason that baby did not starve to death in his bed was the arrival of the Old Sage, who knows that anyone can be useful, deformed or not. The Sage took Weggles to some of his allies, who raised him, and whenever possible the Sage would return to instruct young Weggles in all manner of obscure knowledge. As Weggles now approaches adulthood, he is leaving home for the first time to work at a newly formed school to help other children across the war-ravaged realm accomplish their potential.

It’s worth noting: I’ve got a whole lot of notes dating back to the same era as my superhero notes that are about a vast fantasy world. It occurred to me that I ought to dig into those for Supernatural Sundays, since a fantasy world should surely count as supernatural. I’ve got enough characters in those notes to keep me going until the end of this year’s theme even without thinking up new ideas (not that I intend to do that).